By John R. Vile
Related cases in Freedom of the Press, Mail 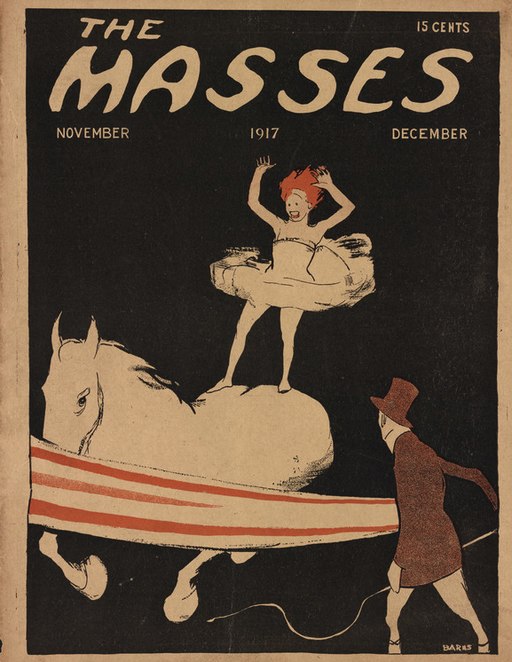 This is the front cover of the 1917 November-December issue of The Masses magazine which was also the last issue. The New York City postmaster — Thomas G. Patten —  made the decision to suppress distribution of the magazine because he believed it violated the Espionage Act of 1917 by encouraging resistance to the draft. Although the U.S. district court decision by Judge Learned Hand in Masses Publishing Co. v. Patten, 244 F. 535 (S.D.N.Y. 1917), was overturned by a federal appeals court, it stands as testament to his attempt to maintain First Amendment freedoms during World War I. (Photo made available by The Modernist Journals Project, public domain)

Although the U.S. district court decision by Judge Learned Hand in Masses Publishing Co. v. Patten, 244 F. 535 (S.D.N.Y. 1917), was overturned by a federal appeals court, it stands as testament to his attempt to maintain First Amendment freedoms during World War I.

Hand thought courts could judge legislation; did not find false rumors in publication

At issue was a decision by the New York City postmaster — Thomas G. Patten — to suppress distribution of a magazine named Masses that he believed violated the Espionage Act of 1917 by encouraging resistance to the draft. Hand acknowledged that Congress had authority under its war powers to forbid use of the mails for materials that discouraged the successful prosecution of the war, but he thought that courts had to judge the legislation according to the standards that Congress set. Although the act had forbidden statements that were willfully false, Hand did not find that the publication at issue spread false rumors but that it expressed anti-war opinions that its authors sincerely believed.

Hand differentiated between persuasion and action

Similarly, although Hand agreed that criticism of the war might cause insubordination, he thought that the government needed to distinguish “the keys of persuasion” from “the triggers of action.” Although the publication praised those who were conscientiously opposed to the draft, he found no evidence that it actually advocated that they resist it. Similarly, he argued that “to assimilate agitation, legitimate as such, with direct incitement to violent resistance, is to disregard the toleration of all methods of political agitation which in normal times is a safeguard of free government.” He observed that “[i]f one stops short of urging upon others that it is their duty or their interest to resist the law, it seems to me one should not be held to have attempted to cause its violation.”

Finally, Hand argued that the provision of the Espionage Act that prohibited individuals “from willfully obstructing the recruiting or enlistment service of the United States” had to be limited “to the direct advocacy of resistance to the recruiting and enlistment service.” Although articles and poems praising those who oppose the war might “have a tendency to arouse emulation in others,” Hand did not see evidence that they actually “counsel[ed] others to follow these examples.” He admonished that the “tradition of English-speaking freedom has depended in no small part upon the merely procedural requirement that the state point with exactness to just that conduct which violates the law.”

Although the Second Circuit Court of Appeals overturned Hand’s ruling in Masses Publishing Co. v. Patten (1917), this case reflects principles — upholding speech that does not actually incite violence — that are now widely accepted in dealing with First Amendment freedoms of speech and press.

The Masses decision influenced the Supreme Court’s ultimate adoption of the “incitement test” for advocacy of illegal activity in Brandenburg v. Ohio (1969). Hand is believed to have influenced decisions by Oliver Wendell Holmes Jr. and others in this area in a more liberal and tolerant direction.