By Stephen Robertson
Related cases in Freedom of the Press, Prior Restraint, State Secrets, Vietnam War 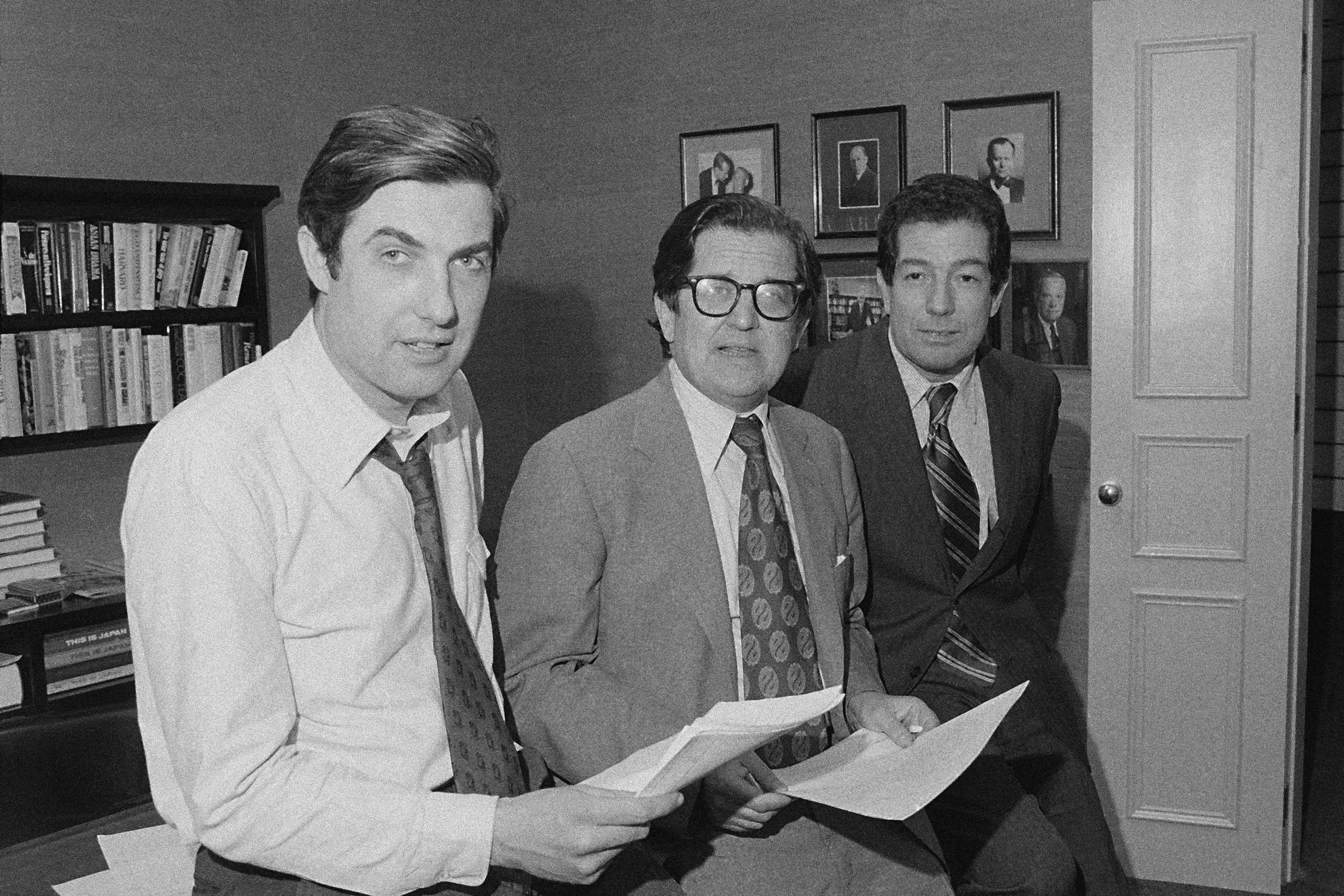 New York Times Co. v. United States (1971), also called the "Pentagon Papers" case, defended the First Amendment right of free press against prior restraint by the government. In this photo, (from left) Reporter Neil Sheehan, Managing Editor A.M. Rosenthal and Foreign News Editor James L. Greenfield are shown in an office of the New York Times in New York, May 1, 1972, after it was announced the team won the Pulitzer Prize for public service for its publication of the Pentagon Papers. Sheehan, who obtained and wrote most of the stories about the papers for the Times, was not cited in the award. (AP Photo/John Lent, republished with permission from The Associated Press)

Often referred to as the “Pentagon Papers” case, the landmark Supreme Court decision in New York Times Co. v. United States, 403 U.S. 713 (1971), defended the First Amendment right of free press against prior restraint by the government.

In 1967 then Secretary of Defense Robert McNamara commissioned a secret government study on American involvement in Vietnam. When completed in 1968, the project comprised 47 volumes containing more than 7,000 pages. The work was labeled classified, and only 15 copies were made.

In early 1971 Daniel Ellsberg, a RAND Corporation employee who had worked on the project, secretly made copies of the documents and passed them to reporters for the New York Times. On June 13, 1971, after several months of review, the Times began to publish these so-called “Pentagon Papers.”

After the first three installments were published, the Nixon administration, citing national security concerns, obtained a restraining order barring further publication of the Papers. When the Second Circuit Court of Appeals affirmed the order, the Times made an emergency appeal to the Supreme Court, which agreed to hear the case the next day (June 26). The Court issued its opinions on June 30; in all, the entire legal process had taken only 15 days.

In a 6-3 decision, the Court dissolved the restraining order and allowed the Times to continue with publication. Citing Bantam Books v. Sullivan (1963), Near v. Minnesota (1931), and Organization for a Better Austin v. Keefe (1971), the three-paragraph per curiam lead opinion noted that “any system of prior restraints comes to this Court bearing a heavy presumption against its constitutional validity” and “the Government thus carries a heavy burden of showing justification for the imposition of such a restraint.” In this case, the government had failed to carry that burden.

Justices differed on reasoning behind opinion

When addressing the question of why the government had failed to carry its burden, however, the Court’s majority splintered into six concurring opinions:

The dissenters — Chief Justice Warren E. Burger and Justices Harry A. Blackmun and John Marshall Harlan II — each filed separate opinions. They contended (in greater or lesser detail) that the case had been resolved far too quickly to consider and resolve fully the critically important legal issues at stake, especially the needs and prerogatives of the executive.

Case is regarded as a victory for the free press, although an ambiguous one

New York Times Co. v United States generally is regarded as a seminal victory for the free press in the United States. The per curiam opinion clearly states that in any situation in which the government wishes to resort to censorship, it faces a difficult task in convincing the courts to issue the necessary legal orders.

Despite this, many First Amendment advocates have criticized the decision. Although this case supports the right to publish, its impact is diluted by the failure of the Court to produce a clearly reasoned majority opinion. The Court’s fractured majority fails to say prior restraint may never be imposed; may be imposed only if the threat to national security can be proven to be real, serious, and immediate; or may be imposed if Congress provides sufficiently clear authorization and guidelines. Thus, far from being an unambiguous declaration of support for a free press, the decision leaves open the possibility of government censorship without specifying the conditions under which the First Amendment might permit it.