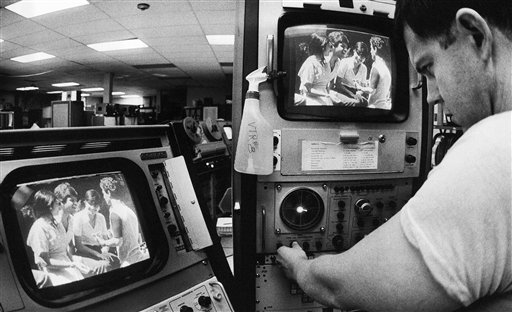 San Francisco's public broadcasting station KQED sought permission to inspect jail facilities for a report on jail suicide, but were denied access by the Alameda County sheriff. KQED filed a suit in federal court, claiming a First Amendment right of access for the press. But in a 4-3 decision, the Supreme Court ruled that the freedom of the press did not include a generalized right to gather information. In this photo, a technician at KQED watches monitors during a program in 1980. (AP Photo/Sal Veder, used with permission from The Associated Press.

KQED sued after being prevented from inspecting a jail

As part of an investigation into an inmate suicide, media corporation KQED in San Francisco had sought permission to inspect the jail facilities and report conditions in the jail alleged to have contributed to the suicide.

Alameda County Sheriff Thomas L. Houchins denied the full request but offered KQED the opportunity to take regular tours of the facility that were open to the general public. KQED, alleging a right to gather information for the public, filed suit in federal court seeking complete access to the jail and inmates. After the federal courts ruled in favor of KQED, the sheriff appealed to the Supreme Court.

In a 4-3 decision (Justices Thurgood Marshall and Harry Blackmun did not participate), the Court reversed the lower courts and ruled that freedom of the press does not include a generalized right to gather information. The majority decision was consistent with the Court’s earlier decision in Pell v. Procunier (1974) limiting face-to-face interviews with prison inmates of the reporter’s choosing.

Writing for the Court, Chief Justice Warren E. Burger reviewed previous cases upholding the media’s “right to gather news” and the prohibitions on governmental interference with attempts by the media to communicate with the public.

He found that the Court has never “intimated a First Amendment guarantee of a right of access to all information within government control.”

Court said First Amendment does not compel others to supply information

Burger conceded that penal institutions were public facilities, of legitimate interest to the general public, and that the media did have an important role in “contributing to remedial action in the conduct of public business” when such action was required. However, this alone “affords no basis for the claim that the First Amendment compels others — private persons or governments — to supply information.”

Burger noted that the County Board of Supervisors held public hearings on the suicide and jail conditions in general. If the media desired special access, “different from or greater than that accorded the public generally,” it should look to the legislature, not the courts.