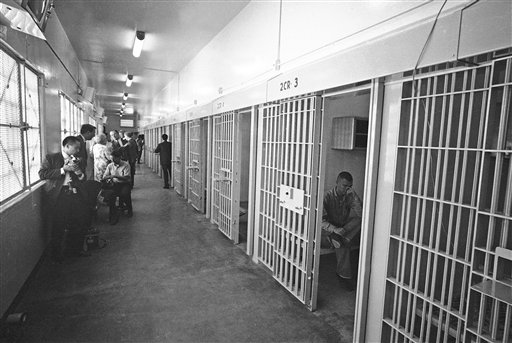 Three journalists sought to interview inmates in California prisons, but were denied face-to-face access based on prison policy banning press interviews of inmates. Both the journalists and the prisoners challenged the constitutionality of the rule. The Supreme Court rejected arguments that the ban on media interviews violated the First Amendment right of freedom of the press. (Photo by Ernest K. Bennett inside California's San Quentin prison in 1967. Reprinted with permission from the Associated Press.)

In Pell v. Procunier, 417 U.S. 817 (1974), the Supreme Court upheld California prison restrictions on face-to-face interviews with inmates. Inmates and journalists had challenged the restrictions as a violation of the First Amendment right of freedom of the press.

The Court rejected the claims of both inmates and journalists in a majority opinion written by Justice Potter Stewart.

He observed that the corrections system had at least three functions — crime deterrence, the quarantining of criminal defendants from society, and the internal security of the prisons.

Stewart noted that “the entry of people into prisons for face-to-face communications with inmates” created “security and related administrative problems,” noting that the current policy had been implemented after an earlier policy permitting the media to select individual inmates for interviews had created special problems that had led to prison violence.

This experience, along with the Court’s opinion in Branzburg v. Hayes (1972), limiting the confidentiality of reporters’ sources from grand jury inquiry, further undermined the claim of reporters to special access under freedom of the press. Stewart argued that the government had no “affirmative duty to make available to journalists sources of information not available to members of the public generally.”

In a partial concurrence, Justice Lewis F. Powell Jr. agreed that inmates had no personal constitutional right as individuals to talk to reporters but argued that the absolute ban on such interviews impermissibly interfered with freedom of the press.

Justice William O. Douglas’s dissenting opinion, joined by Justices William J. Brennan Jr. and Thurgood Marshall, contended that the prison regulations were overly broad as applied to inmates and that the Court’s decision respecting the rights of reporters did not take sufficient account of “the public’s right to know.” Although he favored reasonable “time, place, and manner” restrictions, Douglas thought the prison’s absolute ban on such press access was also overly broad.