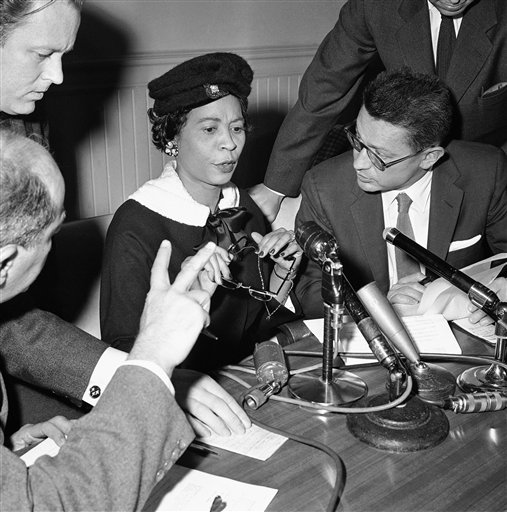 In this photo, Mrs. L.C. “Daisy” Bates, President of the Arkansas state conference of the NAACP, answers questions of reporters during news conference at Finley hall city college of New York on Nov. 1, 1957. Mrs. Bates said she would arrive at her home in Little Rock, Ark., by plane on November 4 despite a city council order calling for the arrest for the arrest of NAACP officers. The arrest order stems from a city council order for the NAACP to turn over its private files to the local government. Mrs. Bates, who arrived in New York City on October 30, said she would go to the police station if she isn’t picked up at the airport. The Supreme Court in Bates v. Little Rock (1960) struck down the law, saying it violated the freedom of association found in the First Amendment. (AP Photo/JR, used with permission from the Associated Press)

The finding of the Supreme Court in Bates v. Little Rock, 361 U.S. 516 (1960), reinforced the principle that freedom of association for the purpose of advocating ideas and airing grievances finds protection within the First Amendment’s free speech and assembly clauses and that the 14th Amendment’s due process clause bars state action that might suppress that principle.

The case grew out of the conflict surrounding the 1957 attempt to integrate Central High School in Little Rock, Arkansas. The local opposition to integration pushed the danger of violence to such a level that President Dwight D. Eisenhower had to summon U.S. Army troops to keep order. These events leading up to the decision in Bates illustrate the nature of the conflict surrounding the civil rights movement during that period.

In an effort to weaken groups such as the National Association for the Advancement of Colored People (NAACP), which had supported racial integration of the public schools in Arkansas, the city council of Little Rock passed an amendment to its local tax ordinances that required certain groups, including the local NAACP chapter, to disclose publicly the names of their members and contributors.

Bates refused to disclose names because of the risk to members

But Daisy Bates, president of the Arkansas NAACP and custodian of the relevant records, refused to comply with the public-disclosure requirement. Instead, she gave the city council an affidavit in which she cited the “anti-NAACP climate” in Arkansas and pointed out the risk that such a disclosure might cause “harassment, economic reprisals, and even bodily harm” of NAACP members.

Bates was then arrested, tried, convicted, and fined $100 for violating the ordinance. Arkansas state courts upheld the conviction and fine, and Bates sought review in the U.S. Supreme Court.

Court said the ordinance was invalid

Writing for a unanimous Court, Justice Potter Stewart pointed to evidence presented at the trial demonstrating that many members of the Little Rock NAACP chapter had declined to renew their memberships in the organization because of the public-disclosure requirement. Moreover, fear of community hostility and economic reprisals had discouraged new members from joining and had induced some of the present members to withdraw.

Stewart rejected the argument that these repressive effects were the result of the private attitudes of persons in the community rather than of the city council by asserting that these effects were “brought to bear only after the exercise of governmental power had threatened to force disclosure of the members’ names.”

Stewart paid due regard to the fundamental power of the community to enact tax ordinances such as the one at issue in this case. However, he countered that when state action impinges on constitutionally protected freedom, that action “must bear a reasonable relationship to the governmental purpose asserted in its justification.” Finding that the disclosure of the names of members bore no such relationship to the legitimate purposes of the ordinance, Stewart held the ordinance invalid.

Justices Hugo L. Black and William O. Douglas joined in a brief concurring opinion in which they asserted that “First Amendment rights are beyond abridgment either by legislation that directly restrains their exercise or by suppression or impairment through harassment, humiliation, or exposure by government.”