By Douglas E. Lee
Related cases in Libel and Slander 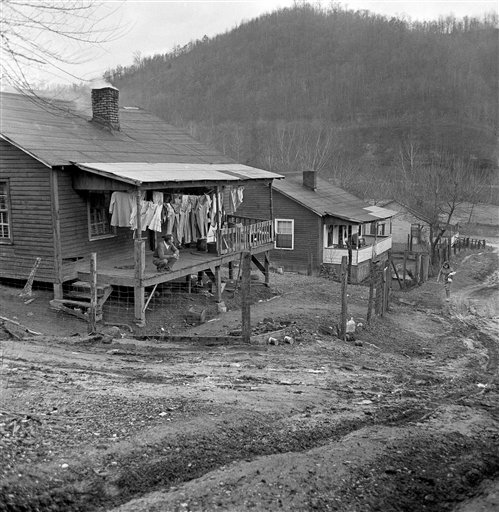 This 1963 photo of Hazard, Kentucky, shows wooden homes that were typical of the living accommodations in the poverty-stricken mountains of eastern Kentucky. When Steve Ashton circulated a pamphlet in Hazard in 1963 to appeal for food, clothing and aid for unemployed coal miners during bitter labor dispute, he criticized the sheriff and police, suggesting corruption. He was charged under the state's criminal libel laws and sentenced to six months in prison. The Supreme Court invalidated Kentucky's law, ruling it violated the First Amendment. (AP Photo, used with permission from the Associated Press)

These laws had allowed prosecutors to bring criminal charges against persons who published false and malicious statements.

Ashton grew out of a bitter labor dispute in Hazard, Kentucky. As part of an effort to collect food and other aid for unemployed miners, Steve Ashton had circulated a pamphlet in which he criticized the local police chief, sheriff, and newspaper publisher.

According to Ashton, the police chief had illegally collected $100 a week to guard a mine operator’s home, the sheriff had used excessive force against suspects, and the newspaper publisher had refused to distribute aid donated for the strikers’ benefit.

Based on these allegations, prosecutors charged Ashton with criminal libel for “publishing a false and malicious publication which tends to degrade or injure.” Ashton was convicted of the charge, fined $3,000, and sentenced to six months in prison. The Kentucky Court of Appeals affirmed.

The Supreme Court unanimously reversed, holding the criminal libel statute to be too vague to withstand constitutional scrutiny.

Under the First Amendment, the Court said, a conviction “for an utterance ‘based on a common law concept of the most general and undefined nature’ could not stand.” Otherwise, the Court held, freedom of speech would suffer “under the guise of regulating conduct that is reachable by the police power.”

In its opinion, the Court cited Chief Justice Charles E. Hughes from De Jonge v. Oregon (1937), which had overturned the conviction of an individual for criminal syndicalism simply for participating in a meeting that communists had organized:

”[I]t is only through free debate and free exchange of ideas that government remains responsive to the will of the people and peaceful change is effected. The right to speak freely and to promote diversity of ideas and programs is therefore one of the chief distinctions that sets us apart from totalitarian regimes. Accordingly a function of free speech under our system of government is to invite dispute. It may indeed best serve its high purpose when it induces a condition of unrest, creates dissatisfaction with conditions as they are, or even stirs people to anger. Speech is often provocative and challenging. It may strike at prejudices and preconceptions and have profound unsettling effects as it presses for acceptance of an idea.”