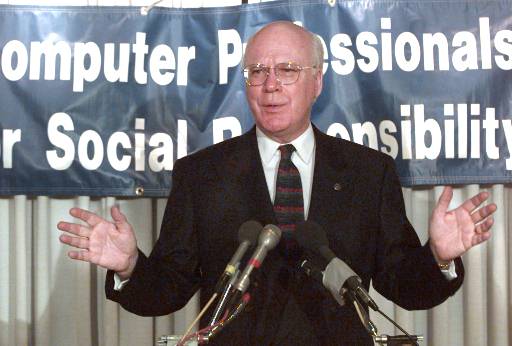 Sen. Patrick Leahy, D-Vt. gestures during an address against the recently enacted Communications Decency Act in 1996 in Washington, D.C. The legislation was part of the broad telecommunications deregulation bill signed by President Clinton, establishing government control of the Internet. The U.S. Supreme Court struck down provisions of the CDA in 1997 in Reno v. American Civil Liberties Union, distinguishing the Internet from radio, which the government regulates. (AP Photo/Ron Edmonds, used with permission from the Associated Press)

The decision is significant because the Court established that speech on the Internet is entitled to the same high degree of First Amendment protection extended to the print media as opposed to the reduced level given the broadcast media.

The CDA was designed “to protect minors from ‘indecent’ and ‘patently offensive’ communications on the Internet” by prohibiting “the knowing transmission of obscene or indecent messages.”

The act allowed Web sites to defend themselves by either good faith efforts to restrict prohibited communications to adults or age verification measures such as credit cards or identification numbers.

Justice John Paul Stevens, who drafted the majority opinion, centered his argument on the difference between the Internet and the radio.

In Federal Communications Commission v. Pacifica Foundation (1978), the Supreme Court had ruled that radio broadcasts (in this case George Carlin’s “Filthy Words” monologue) were subject to greater regulation than the print media. Stevens noted that the radio, unlike the Internet, is intrusive; listeners do not know what they will hear before tuning into a certain channel.

By contrast, Internet users must “click on” Web sites, and they usually have a good idea of whether they are likely to view objectionable material. Thus parental controls are possible.

Stevens also noted that the Internet was situated much differently than radio; “it can hardly be considered a ‘scarce’ expressive commodity” because it “provides relatively unlimited, low-cost capacity for communication of all kind.”

The Court also concluded that the terms indecent and patently offensive in the CDA were ambiguous and vague and reached far beyond the unprotected speech covered by Miller v. California (1973).

Dissent said CDA is like a zoning law, creating 'adult zones' on the Internet

Because she found the current Internet technology insufficient for ensuring that minors could be excluded while still providing adults full access to protected content, she viewed the CDA as ultimately unconstitutional, while permitting such a law at some point in the future when Internet zoning was technologically feasible.

In response to Reno, in 1998 Congress passed the Child Online Protection Act (COPA), which imposed criminal penalties “for the knowing posting, for ‘commercial purposes,’ on World Wide Web content that is ‘harmful to minors,’ ” if the poster did not make attempts to restrict access.

However, COPA was struck down in Ashcroft v. American Civil Liberties Union (2002), when the Court ruled that less restrictive alternatives (primarily filtering and blocking) were potentially more effective options than those in COPA for preventing minors from accessing indecent and obscene materials, especially from foreign sources that Congress is unable to regulate.