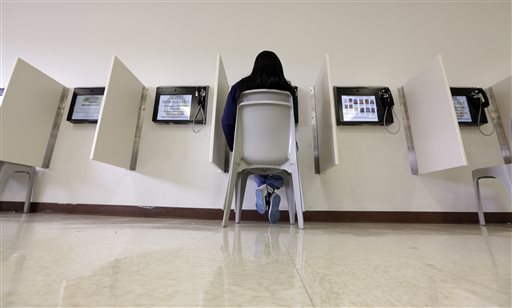 In Overton v. Bazzetta (2003), the Supreme Court upheld certain prison non-contact visitation bans, reaffirming the principle that prison officials have broad discretion in disciplinary policies that may affect inmates’ First Amendment rights. In this photo taken on Tuesday, May 5, 2015, a visitor uses the video visitation system at the Fort Bend County Jail to speak with an inmate, in Richmond, Texas. (AP Photo/David J. Phillip, used with permission from the Associated Press)

The case involved a class-action challenge to various provisions of the Michigan Department of Corrections’ visitation policies, which were amended in 1995 to address drug smuggling and discipline problems. The suit challenged policies for noncontact visitation, including a ban on visitation by minor nieces and nephews and children for whom inmates’ parental rights had been terminated, a ban on visitation by former inmates, and a ban on visitation for inmates with two or more substance-abuse violations.

A federal district court and federal appeals court determined that the bans violated the prisoners’ constitutional rights, including their First Amendment–based associational rights.

The Supreme Court unanimously reversed the lower courts in an opinion written by Justice Anthony M. Kennedy. The Court applied the deferential rational-basis standard of review articulated by its decision in Turner v. Safley (1987), which determined that prison officials do not violate inmates’ constitutional rights if their policies serve a reasonable penological goal, such as safety or rehabilitation.

“We must accord substantial deference to the professional judgment of prison administrators, who bear a significant responsibility for defining the legitimate goals of a corrections system and for determining the most appropriate means to accomplish them,” Kennedy wrote. “The burden, moreover, is not on the State to disprove the validity of prison regulations but on the prisoner to disprove it.”

Kennedy determined that the limitation on visits by children was reasonably related to the goal of “maintaining internal security and protecting child visitors from exposure to sexual or other misconduct or from accidental injury.” Kennedy also upheld the ban on former inmates’ visits based on security reasons. Finally, Kennedy reasoned that the ban on visitation for inmates with multiple drug-abuse violations “serves the legitimate goal of deterring the use of drugs and alcohol within the prisons.”

Justice John Paul Stevens, joined by three other justices, wrote a short concurring opinion, emphasizing that the Court was not abdicating its role of reviewing constitutional claims by inmates.

Justice Clarence Thomas, joined by Antonin Scalia, also wrote a separate concurring opinion, which differed dramatically from the opinions by Kennedy and Stevens. According to Thomas, “states are free to define and redefine all types of punishment, including imprisonment, to encompass various types of deprivations — provided only that those deprivations are consistent with the Eighth Amendment [prohibiting ‘cruel and unusual punishments’].” (Italics in the original.)