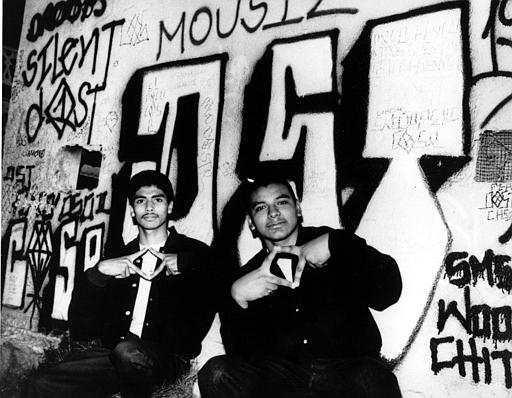 A district and federal appellate court both overturned a conviction in Arizona of a man who provided operational advice to gang members, citing First Amendment protection of free speech. The Supreme Court in Stewart v. McCoy sought to clarify the law on incitement to violence, and observed that long-range planning of a criminal activity could create a significant public danger. In this photo, unidentified members of the Diamond Street gang in Los Angeles sits by gang graffiti marking the gang's territory in April 1988. (AP Photo/Lennox McLendon, used with permission from the Associated Press)

In Stewart v. McCoy, 537 U.S. 993 (2002), the Supreme Court granted permission for the defendant, Jerry Dean McCoy, to proceed with his appeal in forma pauperis (as a poor person), but denied the request by the director of the Arizona Department of Corrections, Terry L. Stewart, to obtain a writ of certiorari to the Ninth Circuit Court of Appeals, challenging the defendant’s release from custody.

At the outset of the case, an Arizona trial court had sentenced the defendant to fifteen years in prison after it convicted him of advising members of a street gang on how to organize themselves.

Supreme Court sought to clarify law on incitement to violence

The Supreme Court’s decision is significant because Justice John Paul Stevens filed a statement that sought to clarify the state of law on the incitement to violence since the Court had ruled in Brandenburg v. Ohio (1969) that individuals could be convicted for such incitement only if their speech brought about an imminent threat of lawless action.

Agreeing that McCoy’s penalty had been very harsh, Stevens observed that the appellate court’s conclusion that the “speech ‘was mere abstract advocacy’ that was not constitutionally proscribable because it did not incite ‘imminent’ lawless action” was “surely debatable.”

Referring to Brandenburg, Stevens said, “While the requirement that the consequence be ‘imminent’ is justified with respect to mere advocacy, the same justification does not necessarily adhere to some speech that performs a teaching function.”

He further observed: “Long range planning of criminal enterprises — which may include oral advice, training exercises, and perhaps the preparation of written materials — involves speech that should not be glibly characterized as mere ‘advocacy’ and certainly may create significant public danger.”

He found that Brandenburg had “not yet considered whether, and if so to what extent, the First Amendment protects such instructional speech,” and wanted to make it clear that he did not consider the denial of certiorari in the case to “be taken as an endorsement of the reasoning of the Court of Appeals.”