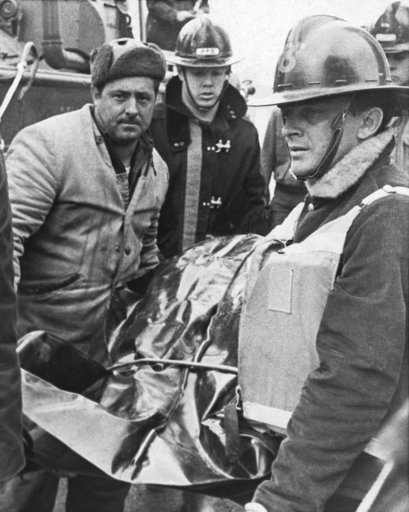 The Silver Bridge collapse in 1967 killed 46 people. A writer from the Cleveland Plain Dealer wrote a story of one of the victim's surviving family, implying the widow was present when he interviewed the children. The Supreme Court upheld a false light verdict against the newspaper. In this 1967 photo, rescuers take a body to a temporary morgue after it was recovered from wreckage of the bridge collapse. (AP Photo, used with permission from the Associated Press)

Cantrell demonstrates one of the limitations to the freedom of the press.

Mrs. Cantrell’s husband had been among a number of people killed when the Silver Bridge across the Ohio River collapsed.

In a story that appeared on Aug. 4, 1968, in the paper’s Sunday magazine, Eszterhas emphasized the children’s “old clothes and poor condition of the Cantrell home... Margaret Cantrell will talk neither about what happened nor about how they are doing. She wears the same mask of non-expression she wore at the funeral. She is a proud woman. She says after it happened, the people in town offered to help them out with money and they refused to take it” (Teeter and Loving 2004: 377).

A U.S. district court allowed Mrs. Cantrell to collect $60,000 for proving that the newspaper showed a reckless disregard for the truth in publishing the story and for implying that she was present during the interview with her children.

Writing for the Supreme Court, Justice Potter Stewart noted the court’s agreement with the district court — which had asked the jury to hold the magazine liable for false statements if the jury found evidence of false or reckless disregard of the truth — but disagreement with the court of appeals decision concluding that no evidence existed of knowledge of inaccuracies in the article.

Stewart found sufficient evidence of what the Court considered “calculated falsehoods” in the article, especially the implication that Mrs. Cantrell was present during the interview. Justice William O. Douglas dissented because he believed that the First Amendment granted the press broader leeway in covering issues like this, which he considered to be “matters of public impact.”

The tort of false light — or putting a plaintiff in a false light — is the most controversial of the four elements in the law of privacy; some state courts do not recognize it.

Although some view false light as a deliberate distortion of the truth (Pember and Calvert 2004), mostly for the purposes of drama, others, while acknowledging that certain speech may put a plaintiff in a false light, think that such speech may not necessarily be considered defamatory by the public (Teeter and Loving 2004).

The courts approach this issue on a case-by-case basis, but generally, actions susceptible to false light are highly offensive to a “reasonable” person and require presentation in a publication or broadcast to become actionable (Zelezny 2004).

Television programming, especially docudramas and motion pictures, are especially vulnerable to this type of offense. A potential safeguard against fictionalization includes purchasing the rights to a story from the actual people involved, by which they forfeit their right to sue in the event that they are not pleased with the way they are portrayed.

This article was originally published in 2009. John Omachonu, Ph.D., is an educator, broadcast media practitioner, and teacher, who for more than two decades, taught college-level courses in mass media law and ethics. He is committed to the tenets, principles and practices of the First Amendment.