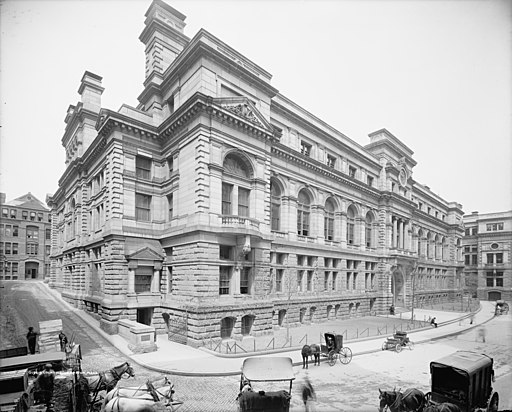 The Massachusetts Supreme Judicial Court is the oldest functioning appellate court in the Americas. It is housed in what is now known as the John Adams Courthouse, built in 1893 and shown here in a 1906 photo. In Commonwealth v. Blanding in 1825, the Massachusetts Supreme Judicial Court upheld a libel conviction in a case against a newspaper that epitomized the principle at the time that "the greater the truth the greater the libel." (Photo via Wikimedia, public domain.)

In Commonwealth v. Blanding, 20 Mass. 304 (1825), the Massachusetts Supreme Judicial Court upheld a libel conviction against an individual who had published a newspaper article alleging that an innkeeper had provided alcohol that resulted in a patron’s death.

The case epitomized contemporary concepts about common law understandings of libel. English law, which some state judiciaries applied, often operated under the principle that “the greater the truth, the greater the libel,” although some U.S. states allowed juries to judge the truthfulness of statements or whether they were maliciously made.

Chief Justice Isaac Parker ruled that publication of the charge indicated malicious intent. He observed that with respect to libel “as a public offense,” it was irrelevant whether the libel proved to be true or false because the harm stemmed from allowing those without authority to so arraign others before the court of public opinion. Such “private intermeddlers” were likely to lead to “duels and assassinations” and represented “the licentiousness of the press” rather than “the liberty of the press.”

Parker further ruled that consistent with English common law precedents, freedom of the press was designed to prevent prior restraint, rather than subsequent punishments, except for limited exceptions, such as “proceedings in legislative assemblies,” in “courts of justice,” and the like.

No need for private citizens to bring accusations in newspapers

Parker refused to apply the principle, which some other state courts applied, that truth could be a defense in libel cases that did not involve “public elective officials or acknowledged candidates for office.” He also refused to follow the laws of some states that allowed juries to decide on the legitimacy of such claims; to do so would be to bring “a man’s whole domestic relations” before the public. Although private citizens might in extreme cases bring accusations in the newspapers, there was no cause to do so in the case at hand. Blanding’s publication of the charge was libelous per se without any need for jury intervention.

The decision in New York Times Co. v. Sullivan (1964) nationalized and constitutionalized libel law, making a distinction similar to, but not identical to, that made in Commonwealth v. Blanding between public and private individuals.