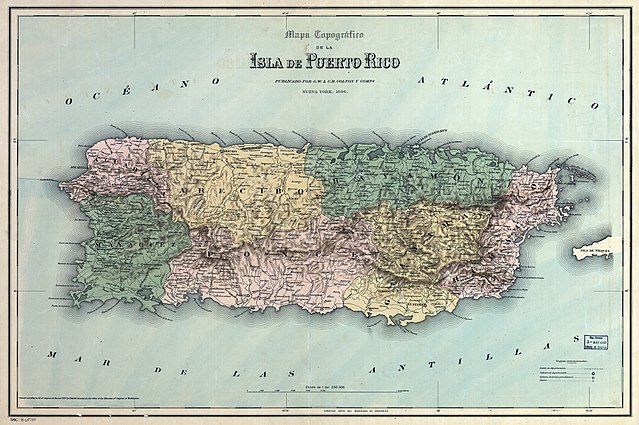 A map of Puerto Rico from 1886. In 1912, the court ruled in favor of a Puerto Rican individual in a libel case, saying that actual malice in his articles could not be proven. Therefore, the statements were not libelous. (Public domain.)

In Gandia v. Pettingill, 222 U.S. 452 (1912), the Supreme Court overturned the conviction of an individual convicted of libel in a case that would later serve as a precedent for modern doctrines seeking to protect First Amendment expressive rights by making libel judgments difficult to win.

An individual in Puerto Rico had published a series of articles in a newspaper, La Correspondencia, alleging that N. B. K. Pettingill, while serving as a U.S. attorney for the territory, had carried on a private practice, which the newspaper described as a monstrous immorality and scandal. Pettingill sued for libel. The judge at his trial instructed the jury that the articles were “libelous per se” and that the jury’s only job was to determine damages.

Court ruled that actual malice was not shown

In the opinion for the Court overturning Gandia’s conviction, Justice Oliver Wendell Holmes Jr. noted that the facts alleged did not constitute a crime and that because the individual being criticized was “a public officer in whose course of action connected with his office the citizens of Porto Rico had a serious interest ... anything bearing on such action was a legitimate subject of statement and comment,” at least in the absence of “express malice.” Making allowance “for the somewhat more exuberant expressions of meridianal [Holmes apparently meant meridional] speech,” Holmes did not believe that the jury would have convicted without the judge’s instructions. He observed that since the conduct alleged, although likely to meet with public disapprobation, was not illegal, the judge should have instructed the jury that “the plaintiff could not recover for it,” unless it showed actual malice. The Court later cited this precedent in Balzac v. People of Puerto Rico (1922). In New York Times Co. v. Sullivan (1964), the Court further refined the standard for showing actual malice in the case of public officials.