By Chad R. Bowman
Related cases in Libel and Slander 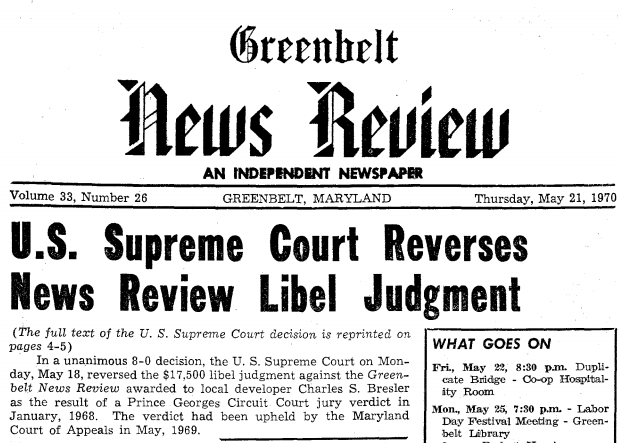 Front page of the Greenbelt News Review after the Supreme Court in Greenbelt Cooperative Publishing Association v. Bresler ruled that the paper had not committed libel. The Court highlighted the importance of context in determining whether statements were defamatory. (Screenshot of Greenbelt News Review May 21, 1970.)

In Greenbelt Cooperative Publishing Association v. Bresler, 398 U.S. 6 (1970), the Supreme Court held that rhetorical hyperbole is not actionable as defamation where a reasonable reader, in light of a statement’s full context, would not understand the intended meaning of a phrase to be a literal accusation. Like other decisions from the Court expanding on New York Times Co. v. Sullivan (1964), Bresler imposes First Amendment free speech and free press limitations on common-law defamation actions.

Challenged statements must be proven as defamatory

Plaintiffs in must prove several elements for a defamation claim, including that a challenged statement is “defamatory” — that it harms one’s reputation or holds the person up to scorn, derision, or ridicule. States have well-developed bodies of case law on what types of statements are defamatory; all jurisdictions regard the accusation that a person has committed a crime as defamatory.

Newspaper used "blackmail" as hyperbole and was sued

In Greenbelt, a weekly newspaper republished statements made at a public meeting that characterized real estate developer Charles Bresler’s negotiations with public officials over a land sale as “blackmail.” Alleging that the paper accused him of blackmail, Bresler sued for libel in Maryland state court. He won damages, which were upheld on appeal by the Maryland Court of Appeals.

The Supreme Court reversed the lower court’s ruling because the word blackmail was not used literally. The Court concluded that even careless readers must have perceived that “the word was no more than rhetorical hyperbole, a vigorous epithet used by those who considered Bresler’s negotiating position extremely unreasonable.” As such, the use of the word blackmail in this context “was not slander when spoken, and not libel when reported.”

The decision set the Court down the road toward Milkovich v. Lorain Journal Co. (1990), which found that defamation liability is improper “for statements that cannot ‘reasonably [be] interpreted as stating actual facts’ about an individual.” By drawing the reasonable meaning of a challenged statement from the entire publication, the Court in Bresler highlighted the importance of context in determining defamatory meaning.

Justice Byron R. White concurred in reversal, but would have done so on the basis of improper jury instructions. He would have deferred to a jury conclusion as to the meaning of blackmail. Justice Hugo L. Black, who favored more expansive protection for the press than afforded under Sullivan, also concurred and was joined by Justice William O. Douglas.