By Tom McInnis
Related cases in Libel and Slander 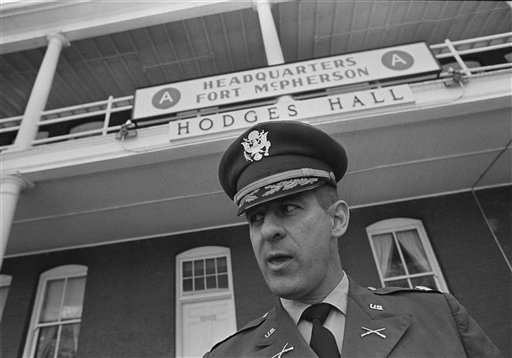 Lt. Col. Anthony Herbert talks to newsmen at Fort McPherson, Georgia in 1971. 1971. Herbert accused the Army of harassing and "muzzling" him because of charges he brought accusing fellow officers of covering up Vietnam atrocities. A "60 Minutes" report brought Herbert's claims into question, and he sued for libel. In Herbert's libel case, which he lost, the Supreme Court ruled that the editorial process could be used as evidence in such libel cases. (AP Photo/Joe Holloway Jr., used with permission from the Associated Press)

In Herbert v. Lando, 441 U.S. 153 (1979), the Supreme Court held that there is no protection under the free speech and press provisions of the First Amendment shielding the editorial process used for new stories when the stories provoke libel charges.

As public figure, Herbert had to prove 'actual malice' to win libel case

Anthony Herbert had sued the respondents, including CBS editor Barry Lando, because Herbert believed he had been defamed by a television show and published articles that featured him. Herbert, an Army officer himself, had accused other officers of covering up war crimes in Vietnam. A "60 Minutes" program brought some of his claims into question. Herbert conceded that he was a “public figure” and therefore had to prove that the respondents had published damaging falsehoods about him with “actual malice.”

During the discovery process, Herbert sought to access materials related to the editing process of the stories. The respondents refused to comply, claiming that the First Amendment protected them against inquiries into this process. The district court rejected these claims, but the Second Circuit Court of Appeals ruled that the First Amendment did protect the editorial process. The Supreme Court then granted certiorari.

Writing for a 6-3 majority, Justice Byron R. White pointed out that the court of appeals had misinterpreted the Supreme Court’s prior precedents, such as New York Times Co. v. Sullivan (1964). Although the Court in Sullivan had meant to create a more difficult standard under the First Amendment to win a libel case, it had not meant to make it more difficult to gather evidence to determine when a libel had been committed.

Precedent did not suggest any First Amendment restriction on the sources from which a plaintiff in a libel case can obtain the necessary evidence to prove actual malice. Instead, it required that in order to prove that a defendant is liable, the plaintiff must focus on the defendant’s conduct and state of mind. This required plaintiffs to be able to inquire into whether a defendant knew or suspected that a story had falsehoods. Therefore, a First Amendment bar on examining the editorial decisions that led to a story would only frustrate the intent of the Court’s earlier decisions.

The Court found unconvincing the respondent’s claim that subjecting the editorial process to discovery in libel cases would create a chilling effect on the editorial process. White wrote that if editors took extra care to avoid publishing knowing or reckless falsehoods because of their fear of liability, such a result would be consistent with the First Amendment. Finally, the Court did not believe that the creation of a constitutional shield for the editorial process would help to combat the escalating costs that publishers had to put into defending defamation cases; only complete immunity from liability suits, which would be unacceptable, would do that.