By James C. Foster
Related cases in Libel and Slander 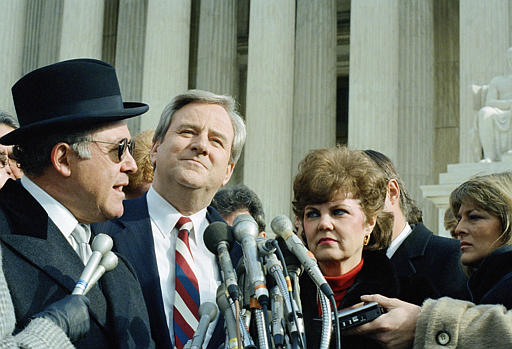 The Rev. Jerry Falwell, center, listens as his legal counsel, Norman Grutman, talks to reporters outside the U.S. Supreme Court Wednesday December 2, 1987 after a court session dealing with a suit filed by Falwell against Hustler magazine and its publisher Larry Flynt. At right is Falwell's wife, Macel Falwell. (AP Photo/Charles Tasnadi)

In Hustler Magazine v. Falwell, 485 U.S. 46 (1988), the Supreme Court reversed a lower court’s judgment for intentional infliction of emotional distress against a publisher, noting that the First Amendment protects publishers’ free speech and press rights from such claims made by public figures regarding materials that are clearly labeled as parodies. The celebrated Court decision pitted two icons of 1980s politics — Larry Flynt and the late Jerry Falwell — against one another in a contest over tort liability and the First Amendment. Flynt is the publisher of Hustler magazine, an explicitly hard-core monthly publication. Falwell was the founder of a conservative Christian group, the Moral Majority, and Liberty University in Lynchburg, Virginia.

Inside the front cover of its November 1983 issue, Hustler published what it characterized as a “parody.” It was a take-off on a national advertising campaign promoting Campari, an Italian liqueur. Campari ads featured various celebrities talking about their “first time,” a deliberate double entendre. Feigning a real Campari ad, Hustler’s parody contains a photograph of Jerry Falwell and an interview with him about his “first time” — a drunken incestuous encounter with his mother in an outhouse. At the bottom of the page was the disclaimer:“ad parody — not to be taken seriously.” Further, the magazine’s table of contents lists the ad as “Fiction; Ad and Personality Parody.”

Falwell sued Flynt to recover damages for libel, invasion of privacy, and intentional infliction of emotional distress. The U.S. District Court for the Western District of Virginia granted a directed verdict for Hustler on Falwell’s invasion of privacy claim. On the libel claim, the jury found against Falwell, concluding that the Hustler parody could not “reasonably be understood as describing actual facts about [Falwell] or actual events in which [he] participated.” However, the jury ruled for Falwell on the intentional infliction of emotional distress claim. The United States Court of Appeals for the Fourth Circuit affirmed this latter judgment, dismissing as “irrelevant” the jury finding that the Hustler parody did not describe actual facts; the appeals court viewed the issue as “whether [the parody’s] publication was sufficiently outrageous to constitute intentional infliction of emotional distress.”

The Supreme Court reversed the Fourth Circuit’s judgment. Chief Justice William H. Rehnquist wrote for a unanimous Court (Justice Anthony M. Kennedy did not participate, having joined the Court after this case was argued). The core of the Court’s decision is that, under the “actual malice rule” of New York Times Co. v. Sullivan (1964), the First Amendment protects publishers from claims for damages for intentional infliction of emotional distress made by public figures.

Rehnquist, a collector of political cartoons, wrote that although Falwell considered the cartoon to be outrageous, “‘[o]utrageousness’ in the area of political and social discourse has an inherent subjectiveness about it which would allow a jury to impose liability on the basis of the jurors’ tastes or views, or ... their dislike of a particular expression. An ‘outrageousness’ standard thus runs afoul of our long-standing refusal to allow damages to be awarded because the speech in question may have an adverse emotional impact on the audience.”