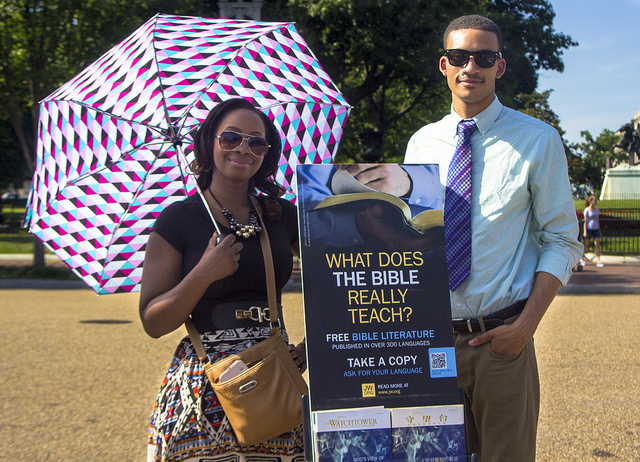 The two Supreme Court cases, Jones v. City of Opelika 316 U.S. 584 (1942) and 319 U.S. 103 (1943) raised important issues regarding free exercise of religion. In the first Jones case (Jones I), the U.S. Supreme Court upheld a nondiscriminatory licensing fee to sellers of religious books and pamphlets. One year later in the second case (Jones II), the Court reversed itself and struck down such fees.In this photo, two Jehovah's Witnesses pass out literature in Washington, D. C. (Image via Zach Montellaro on Flickr, CC BY-NC-SA 2.0)

The two Supreme Court cases, Jones v. City of Opelika 316 U.S. 584 (1942) and 319 U.S. 103 (1943), which were sandwiched between Minersville School District v. Gobitis (1940) and West Virginia State Board of Education v. Barnette (1943), raised important issues regarding free exercise of religion. In the first Jones case (Jones I), the U.S. Supreme Court upheld a nondiscriminatory licensing fee to sellers of religious books and pamphlets. One year later in the second case (Jones II), the Court reversed itself and struck down such fees.

Jones charge for selling books without a license

The City of Opelika, Alabama, had charged Jones, a member of the Jehovah’s Witnesses, with violating its licensing ordinance by selling books, operating as a book agent, and operating as a transient dealer, all without a license. The trial court found the Witness guilty of displaying pamphlets in his upraised hand and selling them on the street. The Court of Appeals of Alabama reversed the conviction, and the Supreme Court of Alabama decided that the licensing provisions were constitutional and reversed the appellate court. The Jehovah’s Witnesses from Alabama appealed to the U.S. Supreme Court, which consolidated the case with two other licensing fee cases involving Witnesses.

Justice Stanley F. Reed wrote the opinion for the Supreme Court, upholding the Opelika ordinances as religiously nondiscriminatory and, therefore, not infringing on the fundamental rights of freedom of speech, press, and religion. The opinion further stated that the selling of the pamphlets was more a commercial transaction than a religious or educational one.

This decision is particularly significant because of Chief Justice Harlan Fiske Stone’s dissent in which he, joined by three other justices, compared the licensing tax to the stamp tax used by England to suppress colonial pamphleteers. The dissent stated that First Amendment freedoms enjoyed a “preferred position” and, because of this, caution must be taken to ensure taxes are not used to suppress the opinions of “discrete and insular minorities.” Also in the dissent was the declaration from the minority that the flag-salute decision of Gobitis had been wrongly decided.

In October 1942, Justice James F. Byrnes, one of the majority in Opelika, resigned and was replaced by Justice Wiley B. Rutledge, who would take the opposite position of his predecessor in Jones II. In the term following Jones I, the Court heard re-argument in Jones II and other consolidated cases, including Murdock v. Pennsylvania (1943).

In Jones II the Court struck down as unconstitutional city ordinances that required Jehovah’s Witnesses and other religious proselytizers to pay a license fee to practice their religion, thus reversing Jones I. The opinion stated that the license tax restrains in advance those constitutional liberties of press and religion and inevitably tends to suppress their exercise.