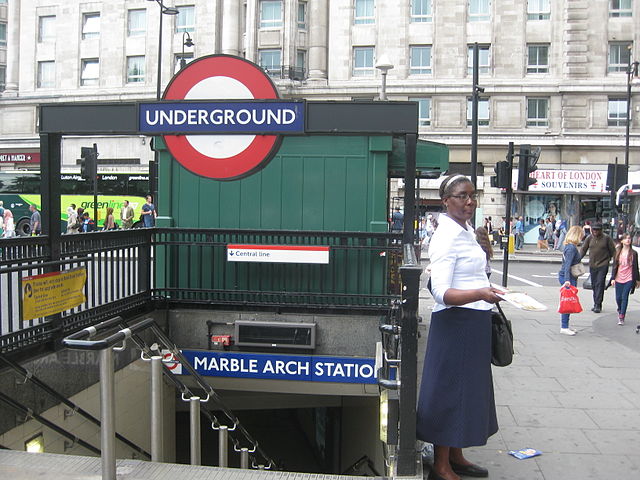 In Marsh v. Alabama, 326 U.S. 501 (1946), the Supreme Court held that a person distributing religious literature on the sidewalk of a “company town” was protected by the First Amendment rights of freedom of the press and religion and could not be arrested for trespass. The case involved a Jehovah's Witness woman passing out literature in the "company town" of Chickasaw, Alabama. In this photo, a Jehovah's Witness member passes out literature on the street. (Image via AusLondoner on Wikimedia Commons, CC BY-SA 4.0)

In Marsh v. Alabama, 326 U.S. 501 (1946), the Supreme Court held that a person distributing religious literature on the sidewalk of a “company town” was protected by the First Amendment rights of freedom of the press and religion and could not be arrested for trespass.

The “company town” is largely a thing of the past, but in the early 1920s much of the U.S. coal mining population lived in company-owned homes, as did many southern cotton mill workers. Company towns comprised a small, but not insignificant, percentage of traditional public space. Around this time, the Gulf Shipbuilding Corporation built homes for its workers, streets, sewers, and a downtown business district in Chickasaw, Alabama (a suburb of Mobile).

Gulf did not prohibit individuals from neighboring areas from entering Chickasaw, driving on its streets, and shopping in the business district. When Grace Marsh, a Jehovah’s Witness, began passing out religious literature on the sidewalk in front of the post office, however, she was told she would not be given a permit to distribute the literature and was asked to leave. Marsh refused. She was arrested and charged under state law with trespass on Gulf property. Marsh’s conviction was affirmed by the state appellate court and the Alabama Supreme Court. In the trial court and throughout the appellate process, Marsh argued that her individual constitutional rights of freedom of press and freedom of religion should not be trumped by the private property owner’s right to exclude.

Court found that the company town functioned like a public town

The U.S. Supreme Court examined the manner in which the Gulf-owned property functioned in the community. Writing for a 5-3 majority, Justice Hugo L. Black noted that “[t]he more an owner, for his advantage, opens up his property for use by the public in general, the more do his rights become circumscribed by the statutory and constitutional rights of those who use it.” The Court continued, “Whether a corporation or a municipality owns or possesses the town[,] the public in either case has an identical interest in the functioning of the community in such manner that the channels of communication remain free.” Accordingly, the Court reversed Marsh’s conviction, concluding that the state could not use a trespass law to punish Marsh for distributing religious literature on the sidewalk of a company town.

Three justices—Stanley F. Reed, Harold H. Burton, and Chief Justice Frederick M. Vinson—dissented. Reed wrote, “The rights of the owner, which the Constitution protects as well as the right of free speech, are not outweighed by the interests of the trespasser, even though he trespasses in behalf of religion or free speech.”

Case has remained a guiding principle of constitutional law

Although Marsh was decided at the end of the era of company towns, its central holding has remained a guiding principle of constitutional law. Two decades later, the Civil Rights Act of 1964 limited private property owners’ ability to refuse entry or service to individuals on the basis of race, color, religion, or national origin in places of public accommodation. Additionally, Marsh became the conceptual foundation for PruneYard Shopping Center v. Robins (1980) and other cases in which individuals claimed First Amendment rights of speech and free exercise in shopping malls, airports, and other quasi-public spaces.