By Linda M. Merola
Related cases in Freedom of the Press 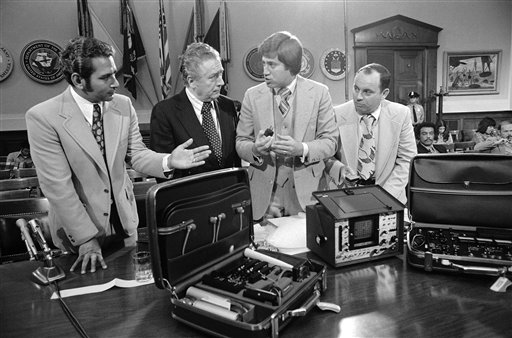 In Bartnicki v. Vopper, 532 U.S. 514 (2001), the Supreme Court found that the First Amendment protects speech that discloses the contents of an illegally intercepted communication. In this photo, Anthony Zavala, left, a former Houston policeman, and three other witnesses look over wiretapping equipment prior to testifying before the House Intelligence Committee in Washington on Oct. 9, 1975. (AP Photo/Charles Gorry, used with permission from the Associated Press)

In Bartnicki v. Vopper, 532 U.S. 514 (2001), the Supreme Court found that the First Amendment protects speech that discloses the contents of an illegally intercepted communication.

A cell phone call between Gloria Bartnicki, chief negotiator for the Wyoming Valley West School District Teachers’ Union, and Anthony Kane, a teacher and president of the union, was intercepted illegally. The subject of the call was teachers’ contract negotiations.

After completion of the negotiations, respondent Frederick Williams (also known as radio personality Frederick Vopper) was given a copy of the tape, and he played excerpts of it on his radio show during a public affairs segment about the contract settlement.

Bartnicki and Kane filed suit for damages under federal and state wiretapping laws against Vopper and Jack Yocum, the president of an organization formed to oppose the teachers’ contract. Neither Vopper nor Yocum had actually illegally intercepted the conversation, but Yocum had given the tape to Vopper.

The petitioners alleged that the respondents had published the tape of the conversation despite the fact that they ”knew or should have known” that the tape was made illegally. Both petitioners and respondents filed motions for summary judgment.

After examining the federal wiretapping statute (18 U.S. 2511), the district court determined that it stated clearly that an individual was in violation when disclosing information that he or she knew or had reason to know had been obtained illegally, regardless of innocence in the actual interception or recording. The district court further concluded that the question of whether the interception by an unidentified person was intentional or accidental represented a genuine issue of material fact that precluded summary judgment. The court, however, refused to accept the respondents’ arguments that, even if their conduct violated the wiretapping statute, such conduct was protected by the First Amendment. Rather, the court upheld the statute, finding that it did not attempt to regulate speech based on content (“content neutral”), but instead based on the illegal origins of the tape.

The 3rd U.S. Circuit Court of Appeals agreed to hear an interlocutory appeal, and the United States intervened as a petitioner to argue the constitutionality of the federal statute. Applying the standard of “intermediate scrutiny” after finding the statute to be “content neutral,” the Court of Appeals determined the statute to be overbroad by “[deterring] significantly more speech than necessary to protect the privacy interests at stake.”

The Court of Appeals thus found that the statute violated the First Amendment and remanded the case with instructions to grant summary judgment in favor of the respondents.

On appeal, the U.S. Supreme Court, in a 6-3 opinion authored by Justice John Paul Stevens, affirmed the decision of the 3rd Circuit, holding that the First Amendment protected the disclosures. The Court agreed that the wiretapping statute was “a content-neutral law of general applicability,” but also found that the statute could properly be considered a regulation of ”pure speech,” because it punished ”disclosure.”

Citing New York Times Co. v. United States (1971) and other cases, the Court asserted that “[a]s a general matter, ‘state action to punish the publication of truthful information seldom can satisfy constitutional standards.’” The Court thus carefully limited the question to be decided before considering the two interests asserted by the government in support of the statute.

In response to the second interest asserted by the government, that of protecting the privacy of communications, the Court acknowledged the ”strength” of this interest, but held that, under these facts, even “privacy concerns give way when balanced against the interest in publishing matters of public importance.”

In his dissent, Chief Justice William H. Rehnquist, joined by Justices Antonin Scalia and Clarence Thomas, stressed privacy values and accused the majority opinion of diminishing First Amendment values by “chilling the speech of the millions of Americans who rely upon electronic technology to communicate each day.”