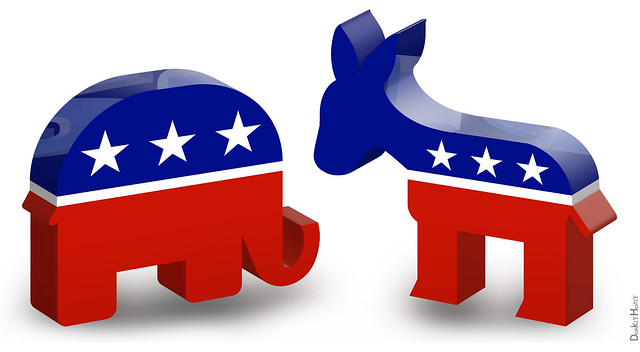 In Broadrick v. Oklahoma, 413 U.S. 601 (1973), the Supreme Court decided that states can limit their employees’ partisan political activities without violating employees’ First Amendment rights. Additionally, the Court ruled that individuals may not contest statutes that might violate the First Amendment rights of others if the statutes are not overbroad. (Image via DonkeyHotey on Flickr, CC BY 2.0)

An Oklahoma statute prohibited certain types of state civil service employees from engaging in a variety of partisan political activities, such as campaigning or soliciting funds for candidates and running for office themselves. The Oklahoma State Personnel Board charged William M. Broadrick and two other classified employees with patent violations of the statute.

Broadrick and the others filed suit against the state, arguing that portions of the statute were vague and overbroad (that is, reaching so broadly as to prohibit protected speech), and therefore unconstitutional. In addition, they challenged the state’s classification of employees, saying that it violated the 14th Amendment’s guaranty of equal protection under the law. After a three-judge district court upheld the law, Broadrick and the others appealed to the Supreme Court.

Court said law did not violate the First Amendment

Writing for the five-justice majority, Justice Byron R. White determined that “the statute . . . seeks to regulate political activity in an even-handed and neutral manner” and that it “regulates a substantial spectrum of conduct that is as manifestly subject to state regulation as the public peace or criminal trespass.” He disposed of Broadrick’s equal protection argument by finding that a state could distinguish between classes of employees.

Moreover, White found that the Oklahoma statute was constitutional on its face and did not violate the First Amendment. Earlier that day, the Court had approved the Hatch Act’s similar restrictions on political activity for federal civil servants in United States Civil Service Commission v. National Association of Letter Carriers (1973).

Like the federal government, states have interests in a fair, impartial, and efficient public service, which justifies limits on the political activities of government employees. According to White, the Oklahoma law limited conduct more than it did speech; he cited the state attorney general’s interpretation of the law as “prohibiting ‘clearly partisan political activity’ only.”

Further, the Court determined that the state statute was not unconstitutionally vague. White explained that all language involves some imprecision, but the language of the statute was clear enough that an “ordinary person exercising ordinary common sense can sufficiently understand and comply” with it.

Finally, Broadrick and the others were accused of conduct clearly prohibited by the statute. They challenged the statute on the basis that it was overly broad: it might be unconstitutional in some situations and therefore could not be applied to them in situations in which the statute was constitutional.

White pointed out that ordinarily litigants may not complain about a statute because it might “be applied unconstitutionally to others, in other situations not before the Court.” The overbreadth must be real and substantial, measured against the legitimate sweep of the statute. Only in special circumstances do courts allow litigants to attack statutes facially for overbreadth for prohibitions that do not or might not apply to the litigants: the statutes must only seek to regulate only spoken words; the statutes control the time, place, and manner of speech; the speech at issue requires some prior official approval; or the claim involves criminal laws that might apply to protected speech.

White concluded that because the statute at issue involved conduct more than pure speech and any overreach was modest, a claim of overbreadth was not appropriate.