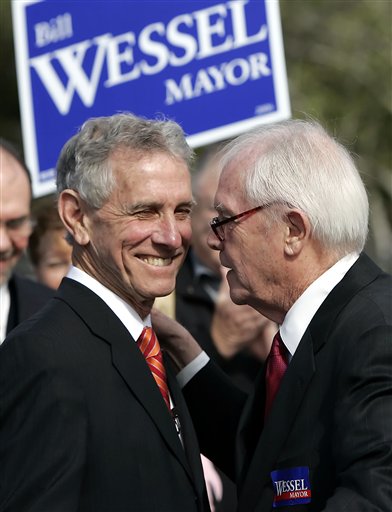 Harry Connick Sr., a former district attorney for New Orleans, and shown here on the right in January 2006, was the center of a free speech case that went to the Supreme Court in the 1980s. Connick had fired an assistant district attorney concerning her comments regarding how the district attorney's office was run. In a 5-4 vote, the divided Supreme Court in 1983 held in Connick v. Myers that Myers's dismissal did not violate her First Amendment speech rights. The court found that her questionnaire to office staff about how the office was run was in general not a matter of public concern and not protected as a public employee. (Photo by Rogelio Solis/AP and reprinted with permission from The Associated Press.)

In Connick v. Myers 461 U.S. 138 (1983), the Supreme Court clarified the level of First Amendment protection for public employees in the workplace by explaining how courts should balance an employee’s right to speak on matters of public importance against an employer’s interests in a disruptive-free workplace.

Sheila Myers, an assistant district attorney in New Orleans, had objected to being transferred to another section of her office.

After receiving notice of the transfer, she prepared and distributed a questionnaire to the office staff that in part raised the issue of whether their office was poorly run.

Harry Connick Sr., the district attorney and Myers’s supervisor, terminated her for refusing the transfer and for undermining his authority with the questionnaire. Myers challenged her dismissal, reasoning that she was fired because she had expressed her opinion of how Connick ran the office and that such termination violated her First Amendment political speech rights.

In a 5-4 vote, a divided Supreme Court held Myers’s dismissal to be constitutional. In the majority opinion of the Court, Justice Byron R. White stated, per the Court’s ruling in Pickering v. Board of Education (1968), that the Court must balance the First Amendment right of government employees to comment upon matters of public concern versus the interest of government to provide its services efficiently.

In applying the Pickering test to the New Orleans case, White found that Myers in general was not speaking about matters of public concern, because in the main, her questionnaire focused on internal office workings. White determined, however, that at least one question — concerning whether Connick forced office staff to perform political campaign work — should be considered of public concern.

Applying the balancing prong of the Pickering test, White asserted that Myers’s questionnaire had the potential to hinder the efficient operation of the district attorney’s office by questioning Connick’s authority. In addition, because Myers circulated the survey as a reaction to receiving an unfavorable assignment, White found that Connick had legitimate reasons to fire her.

First, he felt that Myers adequately satisfied the prong of the Pickering test that an employee’s speech touch on a matter of public concern. As Myers’s questionnaire commented upon how Connick was running a public office, the public would certainly be interested in how staff perceived his management of that office.

Second, addressing the other part of the Pickering test, Brennan claimed that no evidence existed that Myers’s speech had affected the efficient operations of the district attorney’s office. According to him, the mere potential that office efficiency might be affected is not sufficient to satisfy this part of Pickering. As a result of this ruling, most public employee free speech cases are now evaluated under the so-called Pickering-Connick test.