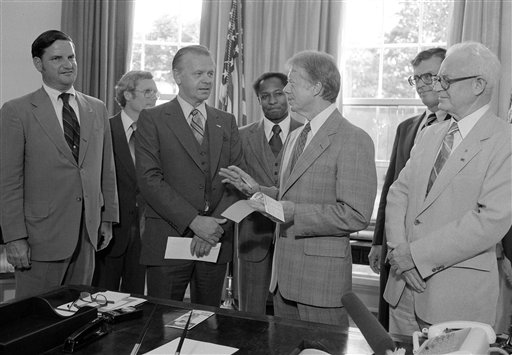 U.S. President Jimmy Carter chats with Bob Bergland, Secretary of Agriculture in the Oval Office in Washington, Monday, Sept. 10, 1979 after signing a pledge to participate in the 1980 Combined Federal Campaign to aid the needy. In Cornelius v. NAACP Legal Defense and Educational Fund (1985), the Supreme Court ruled that a policy excluding advocacy organizations from participating in this program did not violate the First Amendment. The program solicited contributions from federal employees to charitable causes. (AP Photo/Thumma, used with permission from the Associated Press)

In Cornelius v. NAACP Legal Defense and Educational Fund, 473 U.S. 788 (1985), the Supreme Court ruled that a policy excluding advocacy organizations from participating in a program that solicited contributions from federal employees did not violate the First Amendment.

President Dwight D. Eisenhower had created the Combined Federal Campaign (CFC) by executive order in 1957. Under the program, federal employees would be allowed to contribute money each year to a general fund for distribution to local organizations or they could donate to specific organizations in the program. Each employee would be provided a short statement describing the participating groups.

In 1982 President Ronald Reagan issued an amendment specifying that only organizations that “provide or support direct health and welfare services” would be allowed to participate in the CFC. Further, it explicitly declared that groups engaged in “political activity or advocacy, lobbying, or litigation” would be excluded.

The National Association for the Advancement of Colored People brought a lawsuit claiming that its exclusion under the amended order violated the First Amendment. A district court and court of appeals agreed. The Supreme Court reversed in a 4-3 vote. Justices Thurgood Marshall and Lewis F. Powell Jr. did not participate.

O'Connor reasoned that the federal workplace was a nonpublic forum

In the opinion for the Court, Justice Sandra Day O’Connor first noted that solicitation of funds for charities is protected speech under the First Amendment.

Next she considered the identity and type of forum in which the speech in this case took place — the federal workplace at large or specifically the CFC — and whether this forum was a traditional public forum, a public forum by designation, or a nonpublic forum.

O’Connor concluded that the CFC was the forum at issue and that it was a nonpublic forum. Speech in a nonpublic forum may constitutionally be regulated so long as the regulations are reasonable and viewpoint neutral. The Court determined that the amended executive order was reasonable as well as viewpoint neutral, so the restriction barring the NAACP from participating in the CFC did not violate the First Amendment.

Justice Harry A. Blackmun dissented, arguing that O’Connor’s analysis of public versus nonpublic forums was flawed. He stated that her understanding “transforms the First Amendment into a mere ban on viewpoint censorship.”

Blackmun further dissented on the ground that the exclusion of groups such as the NAACP was viewpoint-based discrimination and thus a violation of the First Amendment even if the CFC were a nonpublic forum.

Justice John Paul Stevens also dissented, focusing on the fact that the case did not involve the allocation of any of the undesignated charitable gifts, but only designated contributions. He argued that because the only money that would be given to the NAACP was that which employees individually chose to contribute specifically to the NAACP, the reasons for excluding the NAACP identified by Justice O’Connor were not in fact reasonable.