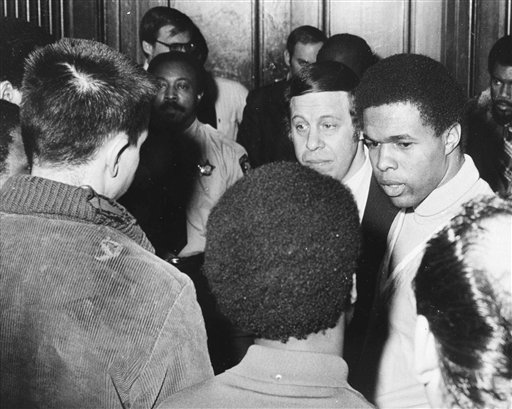 Cook County Sheriff Richard J. Elrod, center, introduces Gale Sayers, right, after Sayers was appointed as a youth consultant on Elrod's staff of county law enforcement officers in 1972. In the 1976 case Elrod v. Burns, the Supreme Court held that Elrod violated the First Amendment when he conditioned the retention of a government job upon membership in a specific political party. (AP Photo/LO, used with permission from the Associated Press)

In Elrod v. Burns, 427 U.S. 347 (1976), the Supreme Court held, 5-4, that a sheriff violated the First Amendment when he conditioned the retention of a government job upon membership in a specific political party. Elrod and subsequent cases have made it more difficult to consider partisanship in public employment, except for those engaged in policymaking functions.

In December 1970, when Richard Elrod, a Democrat, replaced a Republican as the sheriff of Cook County, Ill., he fired or threatened to fire the Republican employees of the office. These non-civil service workers challenged their dismissal on the grounds that the First Amendment protects their freedom to join or be members of a political party of their choice without fear of losing their government jobs.

Writing for the plurality, Justice William J. Brennan Jr. stated that political party loyalty and affiliation was not a constitutionally legitimate ground for dismissing government employees.

In ruling for the first time that a public personnel decision could not be based on political patronage, the Court rejected the government’s contentions that political patronage was not expressly prohibited in the Constitution and that the practice helped contribute to the democratic process.

The Court could not agree as to what standard the government had to meet when terminating employees for political party reasons. Two justices, Potter Stewart and Harry A. Blackmun, refused to join the totality of Brennan’s opinion, concurring on narrower grounds that the government could not use partisanship as grounds to fire employees in nonconfidential, non-policymaking positions.