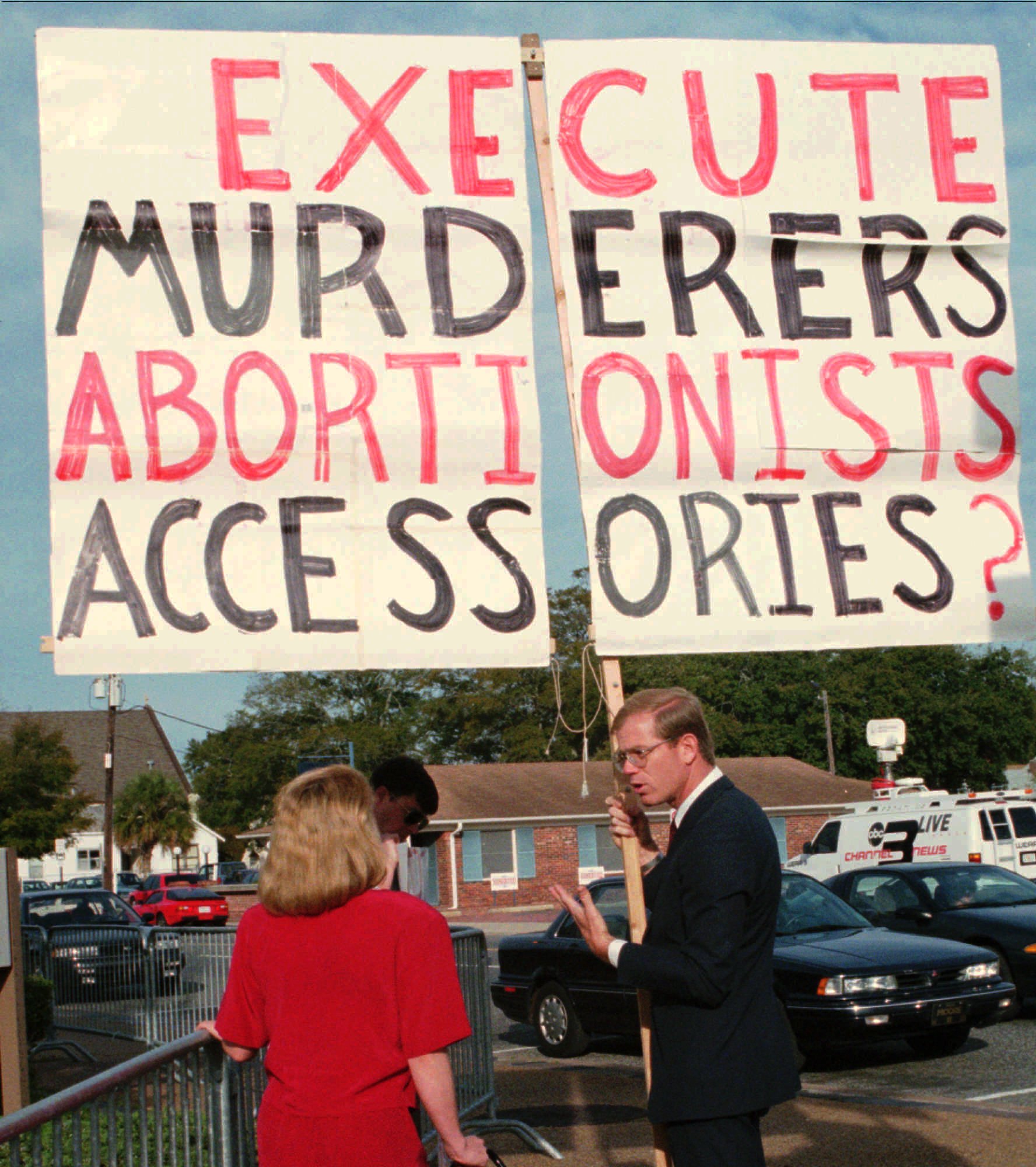 Anti-abortion activist Paul Hill, right, is shown on Feb. 28, 1994, as he confronted a female passerby outside the judicial center in Pensacola, Florida. Later that year, Hill gunned down an abortion doctor and his escort. In response to this and other violent incidents, Congress passed the Freedom of Access to Clinic Entrances Act (FACE) which made it a crime to use force to interfere with abortion clinics. A circuit court upheld the law against a First Amendment challenge. (AP Photo/Mark Foley, With permission from The Associated Press)

In American Life League v. Reno, 47 F.3d 642 (4th Cir. 1995), the 4th U.S. Circuit Court of Appeals upheld the constitutionality of the Freedom of Access to Clinic Entrances Act (FACE) of 1994, a law to combat anti-abortion activists who had become increasingly violent in their attempts to shut down or disrupt abortion clinic operations.

FACE made it a federal crime to use force or the threat of force or physical obstruction to interfere with abortion clinics. For example, one violent incident had involved the fatal shooting of a doctor in Florida.

On the day that President Bill Clinton signed FACE into law in May 1994, the American Life League (ALL) filed suit in a Virginia federal district court, arguing that the legislation was unconstitutional.

ALL, a Virginia-based group whose members engaged in anti-abortion legislative and educational activities, admitted that its members also sought to interfere with abortion providers and cause them financial harm by depriving them of clients.

To achieve these goals, they physically obstructed clinic entrances and tried to intimidate women seeking abortions into changing their minds. ALL claimed that FACE violated the First Amendment because it singled out anti-abortion views for punishment and was too vague.

It also charged that the law exceeded congressional authority under the interstate commerce clause. In American Life League v. Reno (E. D. Va. 1994), the district court ruled against ALL and the organization appealed.

A three-judge panel of the Fourth Circuit Court of Appeals unanimously affirmed the district court’s decision. The appellate court found that in enacting FACE, Congress cited substantial evidence of women being forced to cross state lines to obtain abortions made unavailable in their home states and of anti-abortion protesters crossing state lines to demonstrate at abortion clinics.

Congress had thus rationally concluded that the abortion protests affected interstate commerce and had acted within its constitutional authority to regulate such commerce through FACE.

Court said law was aimed at illegal conduct, not speech

The court also ruled that the law was reasonably designed to protect abortion providers and their clients and that anti-abortion activists were not barred from peacefully protesting; they were only banned from obstructing clinics and using force or the threat of force.

Because the law was aimed at illegal conduct, not at protected speech, it did not violate the First Amendment.