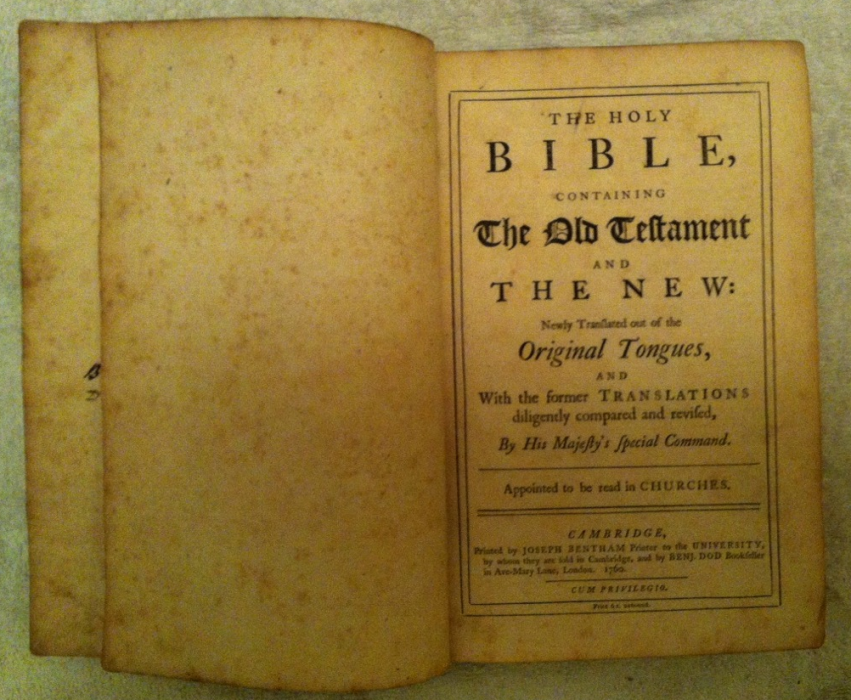 A teacher's corporal punishment of a young Boston student who refused to read the King James version of the Bible was not improper, according to a judge in an 1859 case. The student, encouraged by a Roman Catholic priest who thought the Catholic Douay Version should be used instead, had argued that the school's rules conflicted with his rights under the state constitution to not be harmed by the state for his religious beliefs. (Picture is the title page from the 1760 Cambridge edition of the King James' Bible via Wikimedia by ThatPeskyCommoner, CC BY-SA 3.0)

In Commonwealth v. Cooke, 7 Am. L. Reg. 417 (Police Court of Boston, Mass., 1859), a Massachusetts court ruled against the state’s prosecution of a teacher for corporal punishment of a student who had refused to read from the Bible at his public school.

McLaurin F. Cooke, a teacher at the Eliot School in Boston, had used a long, thick rattan stick to hit 11-year-old Thomas J. Wall on on his palms for 30 minutes, until Wall agreed to repeat the Lord’s Prayer and the Ten Commandments from a King James Bible.

Wall had been encouraged to resist this practice by his Roman Catholic priest, who thought the children should be taught the Catholic Douay Version instead. The court had to decide whether Cooke had the right to punish Wall and whether the punishment was excessive.

Judge Maine relied on the state constitution, which while prohibiting the distribution of public monies “to any religious sect, for the maintenance, exclusively, of its own schools,” also provided that public schools should instruct children in “the principles of piety, justice, and a sacred regard to truth, love to their country, humanity” and other virtues.

Boston had supplemented state statutes to provide for daily Bible reading with instructions that the Lord’s Prayer and Ten Commandments be used.

Wall believed that these provisions conflicted with his constitutional rights, which in Massachusetts provided that “no subject shall be hurt, molested, or restrained in his person, liberty, or estate, for worshipping God in the manner and seasons most agreeably to the dictates of his own conscience, or for his religious professions or sentiments, provided he doth not disturb the public peace, or obstruct others in their religious worship.” The Fourteenth Amendment did not yet exist to apply the provisions of the Bill of Rights to the states.

Judge: Refusing to read Bible could lead to other "pleas of conscience"

Maine wrote, “Our schools are the granite foundation on which our republican form of government rests” and observed that if Roman Catholic children were permitted to plead consciences, others would be able to do so as well. Maine argued that the “Bible has long been in our common schools. It was placed there by our fathers, not for the purpose of teaching sectarian religion, but a knowledge of God and of his will.” He feared that a plea of conscience against use of the Bible would be equally valid against any other such book.

Maine further reasoned that the school teacher had acted under “the implied authority and consent of the parent.”

Admitting that “the apparent magnitude of the offence depends somewhat upon the standpoint from which it is viewed,” using the analogy of a suspension bridge across the Niagara, Judge Maine argued that one thread of accommodation could lead to another “until cables, which human minds cannot sever, shall have found Church and State together forever.”

Cooke had beaten Wall over an extended period, but Wall himself could have ended his punishment by complying. He had been properly “punished for insubordination, and a determination to stand out against the lawful commands of the school. Every blow given was for a continued resistance and a new offence. The offence and the punishment went hand in hand together. The punishment ceased when the offence ceased.”

Maine accordingly discharged the defendant. Clearly a relic of the nineteenth century, this decision, notes Thomas F. Curry (2001), “represented the sentiment of the dominant culture, which could not conceive of its accepted customs and beliefs as sectarian in any way” (p. 56).