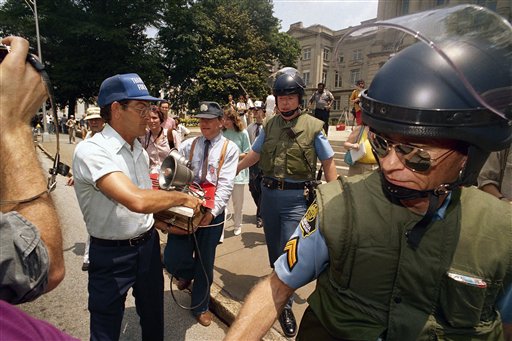 In this photo, Nationalists Movement leader Richard Barrett, second from left, is escorted from in front of the Capitol in Atlanta in 1988. The next year, the Nationalist Movement tried to plan a march in Forsyth County, Ga. However, the county had passed an ordinance allowing administrators to vary the cost of march permits based on how much securing the march would cost. The Supreme Court struck down the ordinance on First Amendment grounds. (AP Photo/Eric Risberg, used with permission from the Associated Press)

In 1987 after a large and expensive civil rights march, Forsyth County, Ga., officials passed an ordinance that allowed its administrator to vary the costs of obtaining a permit based on the expenses the county might incur in maintaining public order.

In January 1989, the Nationalist Movement, a white supremacy group, planned to march in opposition to a federal holiday for Rev. Martin Luther King Jr. When the county administrator announced the cost of the permit for the march, the Nationalist Movement refused to pay it and challenged its constitutionality. A federal district court upheld the ordinance, but the 11th U.S. Circuit Court of Appeals reversed, reasoning that the ordinance unconstitutionally limited speech in a public forum.

On appeal, the Supreme Court ruled 5-4 that the ordinance violated the First Amendment.

Justice Harry A. Blackmun, who authored the majority opinion, noted that the ordinance vested unbridled discretion in the hands of the county administrator of how much to charge for police protection. Blackmun relied on a number of Court precedents, including Freedman v. Maryland (1965), which established that city permitting and licensing schemes must provide sufficiently clear standards and not give government officials unbridled discretion.

Blackmun also determined that the ordinance was fatally flawed because it allowed city officials to charge more for a permit according to their assessment of whether a group’s speech would engender a hostile response. “Speech cannot be financially burdened, any more than it can be punished or banned, simply because it might offend a hostile mob,” he wrote.

Chief Justice William H. Rehnquist, who wrote for the four dissenters, contended that the issue before the Court was whether cities could charge permit applicants more than a nominal fee for speech in a public forum.

He said the Court’s decision in Cox v. New Hampshire (1941) authorized such a result. Rehnquist criticized the majority for “reaching out” and deciding other constitutional issues surrounding the permitting scheme that had not been addressed by the lower courts.