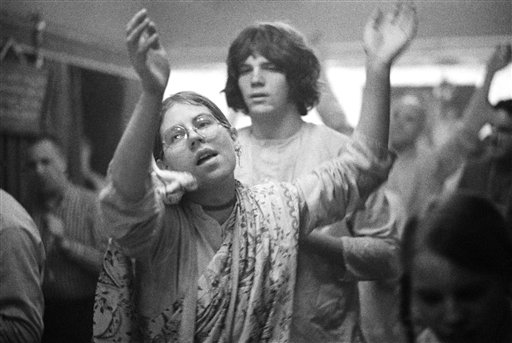 Jyotir Das, a Hare Krishna disciple from Houston, stops motorists to give them candy canes and then asking for a dollar donation during the Christmas season in San Antonio, Texas in 1975. In a pair of 1992 cases involving Hare Krisna disciples, the Supreme Court upheld as a First Amendment right the ability to distribute literature at the airport, but also upheld an airport's ban on solicitation, or asking for money. (AP Photo/Steven Eams, used with permission from the Associated Press)

In Lee v. International Society for Krishna Consciousness, 505 U.S. 830 (1992), the Supreme Court ruled that banning the distribution of literature in airport terminals violates the First Amendment.

The decision was linked to the Court’s ruling in International Society for Krishna Consciousness v. Lee (1992), in which the Court allowed a prohibition on solicitation, arguing that the airport terminal was not a public forum because its primary purpose was to facilitate airline travel.

O’Connor argued that speech cannot be completely restricted simply because airports are not public forums.

Quoting Perry Education Association v. Perry Local Educators’Association (1983), she wrote that speech restrictions must be reasonable and “not an effort to suppress expression merely because public officials oppose the speaker’s view.”

O’Connor viewed the airport as a “multipurpose environment” because it contained shopping, restaurants, banks, and so on, in addition to facilitating air travel, and did not see leafleting as incompatible with such an environment.

Kennedy compared the airport terminal to streets and parks, while pointing out that the “principal purpose” of streets is clearly to facilitate transportation, while still serving as a public forum.

In a similar vein, although air transportation is the principal purpose of airports, they should still be considered public forums, particularly since they are now a common gathering place for citizens: “One of the places left in our mobile society that is suitable for discourse is a metropolitan airport,” he wrote.

Kennedy identified airports as “one of the few government-owned spaces where many persons have extensive contact with other members of the public.”

Dissenting justices thought leafleting led to congestion, could be banned

Rehnquist compared the leafleting ban to the solicitation ban, because both present similar problems of congestion. In addition, leafleting would burden travelers and encourage littering, while also causing additional monitoring costs to the airport to ensure that only leafleting (and not solicitation) was occurring.