By Ronald Kahn
Related cases in Speech on Public Property 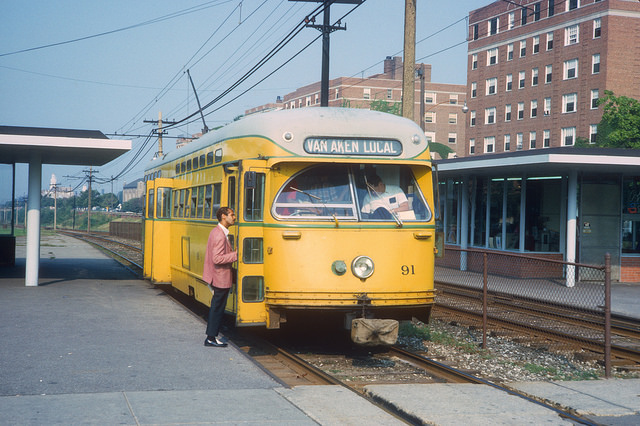 Because a city bus is not a public forum, a rule rejecting political advertisements was not a violation of a political candidate's First Amendment rights, the Supreme Court ruled in the 1974 case of Lehman v. City of Shaker Heights. (Photo of a Shaker Heights Rapid Transit bus in September 9, 1965, via Flickr, public domain)

In Lehman v. City of Shaker Heights, 418 U.S. 298 (1974), the Supreme Court affirmed that city-owned public transportation is not a public forum and that a rule prohibiting political advertisements in these spaces does not violate a candidate’s free speech or equal protection rights.

Harry J. Lehman, a political candidate, sought to advertise on the public transit of Shaker Heights, Ohio, but his advertisement was rejected under a rule that no political advertising could be placed in the cars. He challenged the rule on free speech and equal protection grounds. The Ohio Supreme Court held that the prohibition did not violate a candidate’s First or Fourteenth Amendment rights, and the U.S. Supreme Court affirmed.

Writing for the majority, Justice Harry A. Blackmun argued that the city was engaged primarily in commerce and thus should be treated much like a newspaper or radio show, which need not accept every sort of advertisement. The only additional standard that the city must meet is that its allocation of advertisement space “must not be arbitrary, capricious, or invidious.”

Blackmun wrote that the city’s decision to exclude political advertising was in this case legitimate because it has reasonable objectives of “minimiz[ing] chances of abuse, the appearance of favoritism, and the risk of imposing on a captive audience.”

In his concurring opinion, Justice William O. Douglas emphasized the problem of the captive audience and the constitutional “right of commuters to be free from forced intrusions on their privacy.”

In dissent, Justice William J. Brennan Jr. argued that the prohibition on political advertisements was a content-based violation of free-speech guarantees. He wrote that the majority’s ruling “reverse[s] the traditional priorities of the First Amendment” by preferring commercial speech over “ ‘uninhibited, robust, and wide-open’ debate on public issues.”

The case does seem to break the mold of prior First Amendment cases, which typically placed political speech over economic speech, asked observers of offensive speech to merely “avert their eyes” (that is, Cohen v. California [1971]), and rejected distinctions based on the content of speech.

Not all government property is a public forum

The Court applied the standard of Lehman in other cases.

For example, in Greer v. Spock (1976), the Court upheld a rule against political speech on military bases because “the business of a military installation [is] to train soldiers, not to provide a public forum,” at least when there is no discrimination among political ideas but the regulation is against all political speech.

As in Lehman, Greer defines the primary purpose of a particular area as something that does not involve speech (that is, the purpose of buses is commerce, the purpose of military bases is the training of soldiers) and then decides that the area is not a public forum. Both cases also emphasize that by distinguishing between political and non-political speech, but by not distinguishing between political viewpoints, rules such as these do not run afoul of the Fourteenth Amendment.