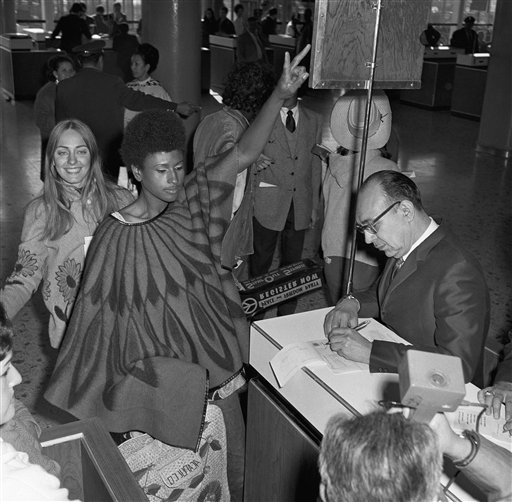 The rock musical Hair was controversial because it featured profanity, nudity and other content some found offensive. However, the Supreme Court ruled in 1975 that the city of Chattanooga's denial of a permit to use city facilities for a performance of Hair violated the First Amendment. In this photo from 1969, two actresses who were performing in a theater production of Hair go through immigration before being deported from Mexico City where officials considered their performances an offense to public morals. (AP Photo, used with permission from The Associated Press.)

In Southeastern Promotions, Ltd. v. Conrad, 420 U.S. 546 (1975), the Supreme Court ruled that Chattanooga, Tennessee, officials violated the First Amendment when they denied use of their facilities to a group seeking to perform the rock musical Hair.

The Court determined that the city’s permitting scheme constituted a classic prior restraint that failed to provide adequate procedural safeguards necessary to protect freedom of expression.

The case arose after city operators of the Chattanooga Memorial Auditorium and the Tivoli (a privately owned theater under lease to the city) denied a permit to Southeastern Promotions, Ltd., the company seeking to present Hair — a controversial rock musical that featured profanity, nudity, and other content deemed offensive by some. The city officials determined that the musical would not be in the “best interests of the community.”

Southeastern sued in federal district court, and city officials countered that the musical was obscene. The district court held hearings on the obscenity question with the assistance of an advisory jury.

The jury concluded the play was obscene, and the district court agreed, finding that the play would run afoul of state and local public nudity laws. The Court of Appeals for the Sixth Circuit affirmed. (Neither the district court nor the appeals court saw Hair performed.) Southeastern then appealed to the Supreme Court.

The Court ruled 6-3 in favor of Southeastern, finding that the city’s system for use of its facilities public forums, in this case — constituted a classic prior restraint on speech.

Writing for the majority, Justice Harry A. Blackmun noted that the city’s scheme did not provide for the procedural safeguards identified by the Court in Freedman v. Maryland (1965), which included that the censor carries the burden of proving the material unprotected by the First Amendment and a requirement of prompt judicial review.

“The board’s system did not provide a procedure for prompt judicial review,” Blackmun wrote. “Throughout, it was petitioner, not the board, that bore the burden of obtaining judicial review.” The majority did not touch the question of whether Hair met the legal definition of obscenity.

Justice William O. Douglas wrote separately, emphasizing that the majority opinion did not go far enough in protecting First Amendment values: “No matter how many procedural safeguards may be imposed, any system which permits governmental officials to inhibit or control the flow of disturbing and unwelcome ideas to the public threatens serious diminution of the breadth and richness of our cultural offerings.”

Justice Byron R. White — joined by Chief Justice Warren E. Burger — dissented, believing that it was “improvident” for the majority to decide the case on the issue of procedural safeguards and that the city could reserve its facilities to performances that could be seen by adults and children. Justice William H. Rehnquist also wrote a dissenting opinion, questioning the majority’s reasoning on procedural safeguards.