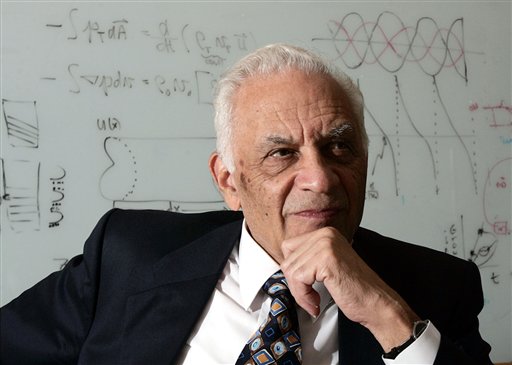 In Bose Corp. v. Consumers Union of United States, Inc., 466 U.S. 485 (1984), the Supreme Court ruled that federal appeals courts hearing defamation or libel cases must conduct “independent appellate review” to determine whether the evidence proves actual malice under New York Times Co. v. Sullivan (1964), regardless of the deference appellate judges usually accord trial courts in evaluating testimony and witness credibility. This case involved a review of the Bose speaker system by Consumer Reports. Consumer Reports was charged with libel, but the Court said there was insufficient evidence. In this photo, Amar G. Bose, founder of Bose Corporation, is seen during an interview with the Associated Press in his office in Framingham, Mass., Tuesday, Aug. 23, 2005. (AP Photo/Chitose Suzuki, used with permission from the Associated Press)

Bose sued after critical review of its speakers

The May 1970 issue of Consumer Reports included a review critical of a new Bose speaker system. One statement noted that the “individual instruments heard through the Bose system seemed to grow to gigantic proportions and tended to wander about the room.” After the magazine refused to retract its article, Bose Corp. successfully sued the publisher, Consumers Union of the United States, Inc., in federal court for product disparagement.

The engineer who supervised the test for Consumer Reports testified that although he wrote in his report that the sound moved “around the room,” which the magazine’s editors published as “about the room,” he heard only lateral sound movement along the wall and had intended that meaning in his report. The trial judge found his testimony about his intent to be “impossible to believe” and concluded that the false statement had been made with actual malice—published while knowing the statement was false or entertaining serious doubts about its truthfulness.

Supreme Court said there was insufficient evidence for actual malice

A federal appeals court overturned the ruling and it was upheld by the Supreme Court in a 5-4 decision authored by Justice John Paul Stevens, with Chief Justice Warren E. Burger concurring. Justices Byron R. White and William H. Rehnquist penned dissents in favor of deferring to the trial court’s factual determinations.

The majority of the Court found insufficient evidence that the engineer knew that he had misstated a fact about the Bose system at the time the article was published. The Court in a lengthy analysis rejected the argument that appeals judges should overturn trial judges’ determinations on actual malice only when such findings are “clearly erroneous.”

The Court concluded that the independent appellate review discussed in Sullivan was a rule of federal constitutional law that “reflects a deeply held conviction that judges—and particularly members of this Court—must exercise such review in order to preserve the precious liberties established and ordained by the Constitution.”

As such, even on factual issues where appeals courts typically defer to trial judges, such as witness credibility, in defamation cases, appeals courts must review the evidence on their own, or de novo.