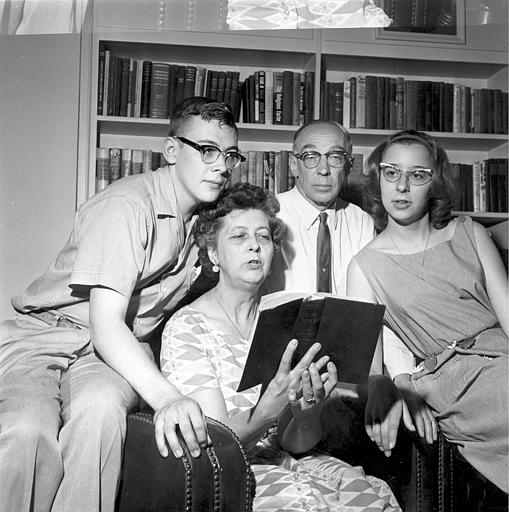 In Doremus v. Board of Education (1952), the Supreme Court said that New Jersey parents and taxpayers did not have standing to challenge daily Bible reading in public schools. The Court did not comment on the constitutionality of the Bible reading until Abington School District v. Schempp (1963), where it struck down compulsory Bible reading in schools after the Schempps complained. In this photo, the Schempp family reads the Bible after the Court ruling in their favor. (AP Photo, used with permission from the Associated Press)

In Doremus v. Board of Education, 342 U.S. 429 (1952), the Supreme Court denied a declaratory judgment sought by residents of New Jersey who were challenging the daily reading, without comment, of five Bible verses from the Old Testament at the beginning of each public school day.

The plaintiffs, one of whom objected as a parent of a high school student and the other as a taxpayer, apparently relied on Illinois ex rel. McCollum v. Board of Education (1948), which had barred on-campus religious exercises, as precedent.

Court said plaintiffs had no standing

Writing for the Court, Justice Robert H. Jackson declared that neither plaintiff’s status established the requisite standing. There was no evidence that the child of the parent bringing the case was offended by the Bible reading, or that she was compelled to listen or participate; moreover, she had already graduated, so no Court decision could protect her rights.

Further, in contrast to Everson v. Board of Education (1947), where funds for bus transportation could be isolated from other expenses, there was no evidence in this case that the Bible reading cost taxpayers any additional money. Jackson concluded, “If the Act may give rise to a legal case or controversy on some behalf, the appellants cannot obtain a decision from this Court by a feigned issue of taxation.”

Dissenters thought taxpayers had standing in such suits

In a dissent joined by Justices Stanley F. Reed and Harold H. Burton, Justice William O. Douglas argued that the Court should render a decision on the merits of the case. He believed that taxpayers might be able to “establish that their public schools were being deflected from the education program for which the taxes were raised.”

Although the case would not meet the standards for a federal taxpayer suit, there was nothing to prevent New Jersey from accepting such suits under its state laws.

The reasoning in Jackson’s decision likely explains why parents who brought subsequent cases challenging prayer and Bible reading in public schools, such as Engel v. Vitale (1962) and Abington School District v. Schempp (1963), alleged specific injury to their children rather than resorting to their status as taxpayers.

Later, the Court opened the door narrowly to some taxpayer suits in Flast v. Cohen (1968), when taxpayer plaintiffs successfully established standing to challenge government spending on secular textbooks for and transportation to religious schools.