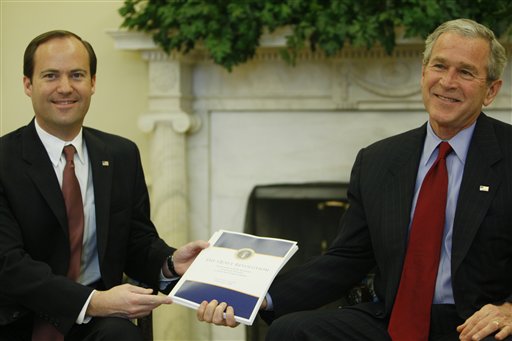 President Bush and Jay Hein, Director of the Office of Faith-Based and Community Initiatives, meet in the White House in 2008. The Supreme Court decided that taxpayers didn't have standing to raise a First Amendment challenge the Office. (AP Photo/Charles Dharapak, used with permission from the Associated Press)

In Hein v. Freedom from Religion Foundation, 551 U.S. ____ (2007), the Supreme Court decided that taxpayers do not have the right to challenge executive branch expenditures on conferences designed to further faith-based initiatives. It thus cut off a potential means of challenging the constitutionality of such expenditures, which some believe violate the Establishment Clause of the First Amendment.

President George W. Bush had created a White House Office of Faith-Based and Community Initiatives, with Jay Hein as director, within the Executive Office of the President through executive orders and had funded it through “general Executive Branch appropriations” rather than through direct congressional appropriations.

The Freedom from Religion Foundation challenged this type of expenditure as a violation of the Establishment Clause. Consistent with its interpretation of prior precedents relative to standing in such cases, the Court ultimately decided on a 5-4 vote that this method of financing effectively immunized the programs against taxpayer challenges.

Justice Samuel A. Alito Jr. wrote the opinion for the Court, which was joined by Chief Justice John G. Roberts Jr. and Justice Anthony M. Kennedy. Alito’s decision focused primarily on applying the Court’s ruling in Flast v. Cohen (1968) relative to taxpayer standing. Noting that the Court had generally classified taxpayer claims as “too generalized and attenuated to support Article III [the Article that outlines judicial powers] standing,” he acknowledged that Flast had recognized exceptions where taxpayers were challenging the exercise of congressional powers under the taxing and spending clause and where taxpayers could show a nexus between their status as taxpayers and “the precise nature of the constitutional infringement alleged.”

Congress had not authorized the faith-based office

In Hein, Congress had not authorized the expenditures through a direct appropriation; the case thus more clearly resembled the decision in Valley Forge Christian College v. Americans United for Separation of Church and State, Inc. (1982), where the Court had rejected standing, than it resembled Flast, where the Court had accepted it. Alito observed that Flast had largely been confined to its facts and that any other approach would raise serious separation of powers concerns by involving courts in matters that did not involve true cases or controversies.

Alito further argued that the Freedom from Religion Foundation had presented no limiting principle. Pointing to the “parade of horribles” that respondents had claimed “could occur if Flast is not extended to discretionary Executive Branch expenditures,” he observed that “Of course, none of these things has happened, even though Flast has not previously been expanded in the way that respondents urge.”

Justice Anthony Kennedy wrote a brief concurring opinion affirming Flast but arguing against its further extension. Justice Antonin Scalia wrote a blistering concurring opinion, joined by Justice Clarence Thomas, arguing that Flast had created “utterly meaningless distinctions” that the Court should overturn in pursuit of logic and the rule of law. Scalia believed that Flast’s mistake had been to recognize standing for “Psychic Injury” rather than a “Wallet Injury,” whereas he thought the former was too insubstantial to continue. In an argument that resembles his objection to “psychological” coercion in other Establishment Clause cases, Scalia argued that the Court should reject any case based on “a taxpayer’s purely psychological displeasure that his funds are being spent in an allegedly unlawful manner.”

Justice David H. Souter wrote a dissent that was joined by Justices John Paul Stevens, Ruth Bader Ginsburg, and Stephen G. Breyer. Souter thought that the members of the Freedom from Religion Foundation had just as much standing as the litigants in Flast. He believed that both cases involved “the right of conscience” and tax expenditures. As to separation of powers, Souter argued that “there is no difference . . . between a Judicial Branch review of an executive decision and a judicial evaluation of a congressional one.” He believed that expenditures on behalf of religious causes sent the improper message that nonreligious adherents were “outsiders” rather than “full members of the political community.”