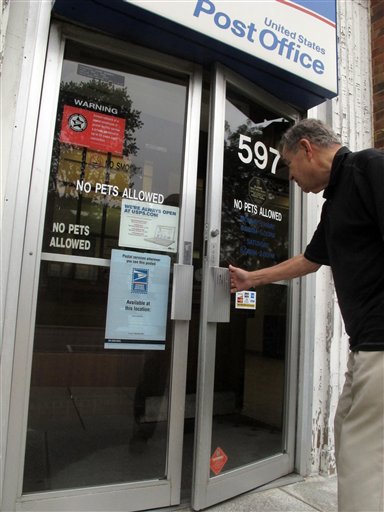 In 1990, the Supreme Court upheld a federal regulation that prohibited solicitation on post office property, including the sidewalks outside. In this photo, a man enters a post office to mail a letter in Worthington, Ohio.  (AP Photo/Kantele Franko, used with permission from The Associated Press.)

In United States v. Kokinda, 497 U.S. 720 (1990), the Supreme Court upheld a federal regulation prohibiting solicitation on post office property, including the sidewalk outside post office buildings. The Court concluded that the protections of the First Amendment were not breeched as the ban on solicitation was reasonable and did not discriminate based on viewpoint.

Two volunteers for the National Democratic Policy Committee, Marsha B. Kokinda and Kevin E. Pearl, set up a table outside the post office in Bowie, Maryland, to solicit contributions and sell materials. They were arrested after refusing to leave the premises and convicted by a magistrate of violating the anti-solicitation regulation.

A federal district court upheld the convictions, reasoning that the postal sidewalk was a nonpublic forum and that the solicitation ban was reasonable. A divided panel of the Fourth Circuit Court of Appeals reversed on First Amendment grounds. The panel majority determined that a postal sidewalk is a traditional public forum and discounted the government’s interests in the solicitation ban.

On appeal, the Court narrowly sided with the government, 5-4.

“The postal sidewalk at issue does not have the characteristics of public sidewalks traditionally open to expressive activity,” Justice Sandra Day O’Connor wrote for a plurality. Restrictions on expression at nonpublic forums must be reasonable and not discriminate based on viewpoint.

Four justices dissented, arguing that postal sidewalk was a type of public forum

Justice William J. Brennan Jr., joined by three other justices, dissented, finding that the postal sidewalk was either a traditional public forum or a limited public forum — not a nonpublic forum. He questioned the plurality’s assertion that solicitation was inherently disruptive of postal business.

“The First Amendment demands that the Postal Service prohibit solicitation only when it actually threatens legitimate government interests,” he wrote. He also questioned why solicitation was treated more harshly than other forms of expression.