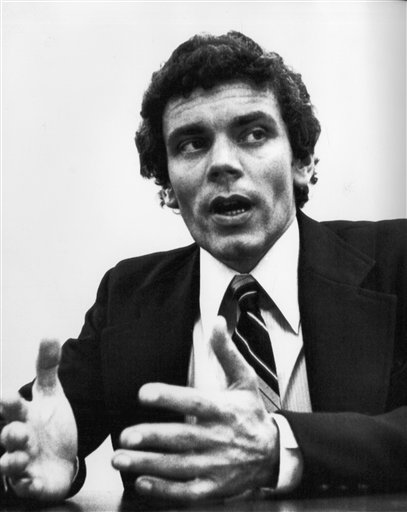 Frank Snepp, a former CIA intelligence analyst in Saigon and one of the last Americans to leave, is pictured during an interview in 1977. Snepp is the author of a book about the fall of Saigon; however, Snepp did not fulfill his contractual obligation of submitting his manuscript for prepublication review. In Snepp v. United States (1980), the Supreme Court established that the agreement did not violate Snepp's First Amendment rights. (AP Photo, used with permission from the Associated Press)

It also determined that those employees who attempt to ignore or evade these prepublication review requirements may suffer financial repercussions.

In 1977, former Central Intelligence Agency (CIA) agent Frank Snepp published a book, Decent Interval, describing the CIA’s role in Vietnam, but he did not fulfill his contractual obligation as a condition of employment that he submit his manuscript for prepublication review.

The government sued Snepp for breach of contract. A federal district court imposed a constructive trust on Snepp’s proceeds from his book and enjoined him from future publication without prior review. A federal appeals court supported the injunction but overturned the constructive trust, limiting recovery to nominal damages and any punitive damages the government could establish at trial.

The Court ruled 6-3 against Snepp on all counts. Although Snepp claimed that the prepublication agreement constituted an unconstitutional prior restraint on his First Amendment rights, the Court’s per curiam opinion held that the agreement was an appropriate and reasonable means to prevent unauthorized disclosure of CIA sources and methods.

The government argued that the federal appeals court’s proposed remedy via proof of damages might require the government to disclose classified information or forgo the remedy. The Court held that that outcome might either harm the CIA’s information-gathering capabilities or unjustly enrich Snepp. Thus, the Court reimposed the constructive trust against Snepp’s profits from Decent Interval.

In Snepp’s autobiographical book regarding the case, Irreparable Harm, he revealed the behind-the-scenes development of the Court’s per curiam opinion (pp. 338–354). Initially, the Court rejected both parties’ petitions for a writ of certiorari, with Justice Lewis F. Powell Jr., a former intelligence officer, as the lone protestor.

Justice Powell wrote a dissenting opinion supporting reimposition of the constructive trust, which was eventually embraced by six justices and evolved into the Court’s per curiam opinion supporting the summary reversal. Without Powell’s initiative, the government would have been powerless to seize Snepp’s profits.

The per curiam opinion’s assertion of a “compelling interest in protecting both the secrecy of information important to our national security and the appearance of confidentiality so essential to the effective operation of our foreign intelligence service” was reiterated as a foundation for the Court’s subsequent decision in Haig v. Agee (1981), which denied a passport to a former CIA agent who intended to travel abroad “to expose CIA officers and agents.”