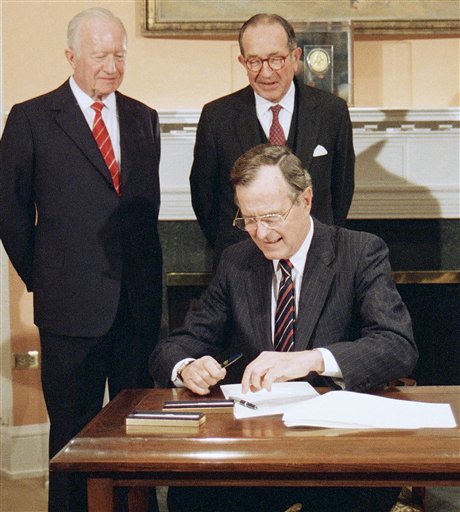 In United States v. National Treasury Employees Union (1995), the Supreme Court invalidated part of the 1989 Ethics Reform Act that banned government employees from accepting honoraria for making a speech or appearance even if it had no connection with their official government duties. The Court said the ban was an infringement on the free speech rights of government employees. In this photo, President George H. W. Bush signs the Ethics Reform bill into law in 1989. (AP Photo/Barry Thumma, used with permission from the Associated Press)

The 1989 Ethics Reform Act contained a provision amending the 1978 Ethics in Government Act to prohibit any member of Congress, executive branch officer, or other federal government employees from accepting honoraria for making a speech, making an appearance, or writing a speech, even if such activities had no connection to their official government duties.

The National Treasury Employees Union filed a suit in district court, claiming that the 1989 act violated the free speech rights of its members. The district court, affirmed by the appellate court, held for the union, asserting that the government did not show a nexus between the prohibited activities and its desire to eliminate actual or apparent improprieties by government employees.

Writing for the Court, Justice John Paul Stevens noted that the honoraria ban did curtail expressive behavior, but the government did not show how such a curtailment would further its interest in providing impartial government implementation of policy, especially for rank-and-file government employees.

As the act provided no support for establishing a nexus between the ban and the nature of specific government jobs, the Court held the entire honoraria prohibition unconstitutional. The majority emphasized that the government’s burden was far greater in this case because it involved a sweeping statute that impacted the free speech rights of countless employees, as opposed to an “isolated disciplinary action.”

Justice Sandra Day O’Connor concurred with the judgment of the Court, finding the ban unconstitutional, but took issue with Stevens’s remedy, which would not allow the honoraria ban to be applied to any government official. She claimed that the Court had acknowledged that the law might be effectively imposed on high-ranking officials — for example, members of Congress; as such, the Court should allow the ban to be applied to upper-level officials.

Chief Justice William H. Rehnquist, in dissent, agreed with O’Connor that the remedy was too sweeping and that the Court could have easily made the ban inapplicable to lower-level government employees and left it at that. On a more fundamental level, Rehnquist contended that the Court gave little deference to the government’s concern as reflected in the honoraria ban.

The Court’s ruling in this case continued its often-confusing jurisprudence concerning government laws that, in the pursuit of creating an impartial or efficient workforce, would restrict employee rights.