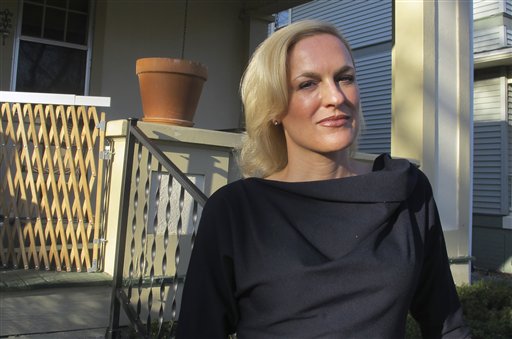 In 1973, the U.S. Supreme Court upheld the constitutionality of the Hatch Act against claims that its restrictions on political activities of federal workers violated their free speech rights. In that case, United Civil Service Commission v. National Association of Letter Carriers, six members of the union wanted to campaign for candidates for public office, but were prevented by the Hatch Act. The Hatch Act was relaxed in 1993, but many prohibitions still exist. For example, Kristin DiCenso, an employee with the Illinois Department of Natural Resources, is shown in this March 2012 photo after she complained of how the 1939 Hatch Act prevented her from running for a court clerk's position last year because part of her salary was paid with federal money, and because she supervised departments that received federal funds. "When someone is 'hatched out,' it's like a bad word," said the 40-year-old single mother. "I was utterly deflated. It's insanity." (AP Photo/Shannon McFarland, used with permission from The Associated Press.)

In United States Civil Service Commission v. National Association of Letter Carriers, 413 U.S. 548 (1973), the Supreme Court upheld the constitutionality of the Hatch Act of 1939 and its amendments, ruling that the act did not violate the First Amendment rights of federal workers.

Starting with the Hatch Act of 1939, Congress passed a variety of laws that sought to limit the ability of the Franklin D. Roosevelt administration to use the federal bureaucracy for political or partisan purposes.

Section 9 of the 1939 act prohibited employees and officers of the executive branch from taking “any active part in political management or in political campaigns.”

Section 15 of the same act empowered the U.S. Civil Service Commission to enforce the act and to produce a list of the activities that made up the political management of a campaign. These activities were a codification of a variety of actions found in previous executive orders aimed at preventing federal employees from interfering with elections or election results.

In United Public Workers of America v. Mitchell (1947), the Court narrowly upheld the Hatch Act by a 4-3 vote (two members of the Court did not participate in the case). This margin with less than a full Court left open the question of what a full Court would decide, and in 1973 in Letter Carriers a 6-3 decision did support the constitutionality of the Hatch Act.

Letter Carriers constituted another challenge to Section 9 of the Hatch Act.

Six members of the union wanted to campaign for candidates for public office. The challengers of the act not only questioned the vagueness of Section 9, which banned “political activity,” but also argued that decisions after Mitchell had eroded its holding, so that the First Amendment rendered the ban on political activities unconstitutional.

The majority, in an opinion authored by Justice Byron L. White, rejected patronage and stated that “federal service should depend upon meritorious performance rather than political service, and that the political influence of federal employees on others and the electoral process should be limited.”

The basis of this claim rested on the majority’s recounting of the nineteenth-century reforms directed against spoils and in their agreement that “partisan political activities by federal employees must be limited if the Government is to operate effectively and fairly.” Political neutralization is essential to representative government; it must not be eroded by the will of the party taking control of the government.

Elsewhere in their decision, the justices cited the need for efficiency and pointed to the contribution of political neutrality to the good performance of administrative duties as other reasons why the Hatch restrictions were reasonable restrictions upon the First Amendment rights of federal workers.

First, the meaning of act’s restriction that no one shall take “an active part . . . in political campaigns” was so overbroad and vague that it lacked legal precision. In noting that the Civil Service Commission’s own rulings on this prohibition were voluminous, the dissenters claimed that the restriction would have a chilling effect on the exercise of free speech among federal employees.

The second argument was that Mitchell was no longer good law because that decision rested on the logic that government employment was a privilege, not a right, and therefore employment could be conditioned upon the sacrifice of certain rights.

Congress relaxes some restrictions of Hatch Act in 1993

The dissenters noted recent decisions, specifically Perry v. Sindermann (1972), that had eroded the right-versus-privilege distinction. Limitation of one’s First Amendment rights could not be a condition for federal employment, especially if the requirements in the Hatch Act were not narrowly tailored and precisely applicable to the activity prohibited.

Although the Mitchell and Letter Carriers decisions upheld the Hatch Act, Congress amended and relaxed some of its restrictions in 1993.