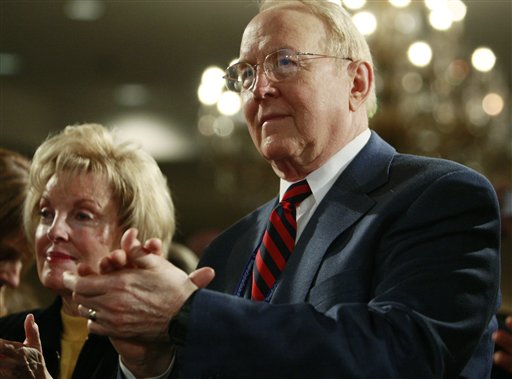 Christian evangelical leader James Dobson, right, and his wife Shirley, stand and applaud as President Bush, not pictured, addresses the National Religious Broadcasters 2008 Convention in Tennessee. Dobson's Focus on the Family organization produces Christian films and literature. Lamb's Chapel v. Center Moriches Union Free School District (1993) overturned a ruling that had allowed a church be banned from showing a Focus on the Family film at a public school, reasoning that the law prohibiting the use of schools for religious purposes violated the First Amendment. (AP Photo/Charles Dharapak, used with permission from the Associated Press)

At issue was a New York law that prohibited public school property from being used for religious purposes, even during nonschool hours.

Lamb’s Chapel, an evangelical church, sought to show a film series produced by James Dobson of the Christian group Focus on the Family. The films depicted family issues from a Christian perspective.

Writing for the Court, Justice Byron R. White explained that banning religious groups but allowing other groups was an unconstitutional content-based restriction on speech and expression.

Furthermore, White said that showing a religious film at the meetings did not violate any of the three prongs of the Lemon test, first articulated by Chief Justice Warren E. Burger in the case of Lemon v. Kurtzman (1971), because the action “has a secular purpose, does not have the principal or primary effect of advancing or inhibiting religion, and does not foster an excessive entanglement with religion.”

In a nod to Justice Sandra Day O’Connor’s reformulated second prong of the Lemon test, White said that because all groups were allowed access, there was no realistic danger that the community would think the school district was “endorsing religion.”

In a separate concurring opinion, Justice Antonin Scalia agreed that the meetings and films were permissible but lamented the Court’s use of the Lemon test. Comparing it to “some ghoul in a late-night horror movie that repeatedly sits up in its grave and shuffles abroad,” Scalia said, “Lemon stalks our Establishment Clause jurisprudence once again, frightening little children and school attorneys. . .” He called for the test’s death and specifically criticized Justices White, O’Connor, and Anthony M. Kennedy for seemingly repudiating it in past cases only to use it again.

Court has moved to acommodationist view of religion

Although the Court ruled on free speech grounds, the case epitomized the Court’s increasingly accommodationist stance toward cases that raised establishment issues under Chief Justice William H. Rehnquist, in sharp contrast to the more separationist decisions of the Earl Warren and Warren E. Burger courts.

The Court relied on Lamb’s Chapel to allow a Christian group of students to meet at a public secondary school after school hours in Good News Club v. Milford Central School (2001). The Court again determined that the exclusion of a religious group violated its free speech rights.