By John R. Vile
Related cases in Rights of Association 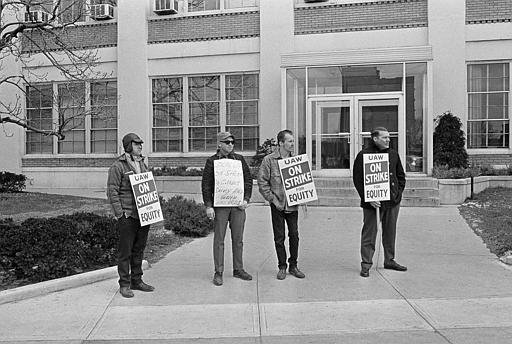 The UAW unsuccesfully challenged a provision in a federal law that withheld food stamps to individuals with family members who were on strike. They said it burdened First Amendment rights of association and expression. The Supreme Court found that withholding a government benefit did not infringe upon constitutional rights of association and speech. In this photo, members of the UAW are on strike picketing a GM plant in Ohio in 1972. (AP photo, used with permission from the Associated Press)

The Supreme Court ruling in Lyng v. International Union, UAW, 485 U.S. 360 (1988), reversed a lower court decision, finding that a provision of the Omnibus Budget Reconciliation Act of 1981 limiting food stamps for individuals with family members who were on strike did not violate either the First Amendment rights of association or expression or the equal protection component of the due process clause of the Fifth Amendment.

The court issued a summary judgment for the appellees, holding that the statute is unconstitutional in that it interferes with associational and expressive rights granted in the First Amendment and violates the equal protection component of the due process clause of the Fifth Amendment. The secretary of agriculture appealed directly to the Supreme Court.

Justice Byron R. White wrote the opinion of the Court and observed that the Court’s decision in Lyng v. Catillo (1986), deferring to the congressional definition of “household” in respect to food stamps, covered this case.

He said that the amended law did nothing to “order” any individuals not to dine together: “It does not ‘order’ appellees not to associate together for the purpose of conducting a strike, or for any other purpose, and it does not ‘prevent’ them from associating together or burden their ability to do so in any significant manner.”

White noted that in Regan v. Taxation With Representation of Washington (1983), the Court had decided “that a legislature’s decision not to subsidize the exercise of a fundamental right does not infringe the right.”

White further distinguished the case from Abood v. Detroit Board of Education (1977), in which nonunion employees had successfully resisted a requirement that they pay a fee that went toward propagation of views with which they disagreed. In contrast, this law “does not require appellees to participate in political activities or support political views with which they disagree. It declines to extend additional food stamp assistance to striking individuals merely because the decision to strike inevitably leads to a decline in their income.”

White thought that the Court’s stance should be highly deferential to legislative judgments. He believed the government could justify its limits on food stamps as a way of limiting federal expenditures, as a way of directing assistance where it was most needed, and as a way of seeing that it did not “provide one-sided support for labor strikes.”

Justice Thurgood Marshall wrote a dissenting opinion, joined by William J. Brennan Jr. and Harry A. Blackmun, in which he denied that the law could even be justified through use of the deferential rational basis test.

He focused on what he considered to be a denial of equal protection by treating those unemployed because they were participating in a strike differently from those who were unemployed for other reasons. He also observed that the government had provided aid to employers whose workers were on strike.