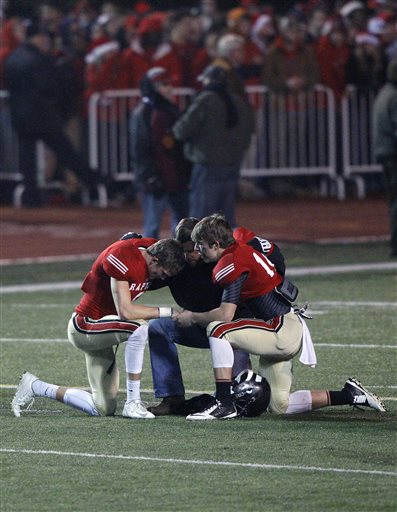 In Santa Fe Independent School District v. Doe, 530 U.S. 290 (2000), the Supreme Court ruled that a school policy of beginning football games with a prayer led by a nominated student body representative violated the establishment clause of the First Amendment. The case limited the opportunities public schools have to endorse religious messages at school ceremonies. In this photo, Ravenwood’s Austin Percy, left, and Nick Barton share a prayer after their team lost 35-34 against Maryville on Dec. 6, 2014, in Cookeville, Tennessee. (AP Photo/Wade Payne, used with permission from the Associated Press)

In Santa Fe Independent School District v. Doe, 530 U.S. 290 (2000), the Supreme Court ruled that a school policy of beginning football games with a prayer led by a nominated student body representative violated the establishment clause of the First Amendment. The case limited the opportunities public schools have to endorse religious messages at school ceremonies, following on Lee v. Weisman (1992), in which the Court struck down a school-sponsored nonsectarian prayer at a middle-school graduation ceremony.

In 1995 the school district in Santa Fe, a small and overwhelmingly Baptist town outside Houston, Texas, established a policy that allowed the student body to vote on whether or not they wished to have an invocation to “solemnize” sports events. If the vote was affirmative, a second student vote would determine which student would give the invocation. The invocation was supposed to be nonsectarian, nonproselytizing, and broadcast over the school’s loudspeaker before each football game. The Does (pseudonyms for one Catholic and one Mormon family) sued to enjoin the practice. School officials in Santa Fe argued that there was no official state action, because the decision to pray was determined by student elections and because it was a nominated student, not a school-appointed official, giving the prayer.

Court ruled that the prayer was government speech, unconstitutional

The key question for the Court was whether the student prayer was protected private speech or a state-sponsored religious endorsement. Justice John Paul Stevens, writing for the 6-3 majority, opined that the student-led prayer was government speech. The prayer took place on school property, at a school-sponsored event, and was broadcast over a school-owned loudspeaker that was controlled by school officials, to a crowd in a school-owned stadium filled with school insignias. The election was sponsored by the school and would allow a majority of the student body to subject minority views to constitutionally improper messages. Additionally, for some students, like the players, cheerleaders, and band members, attendance is mandatory.

Stevens also applied the coercion test announced in Lee. Under that test, students should not be faced with the choice of not attending or attending and hearing a personally offensive religious ritual. Stevens argued that the elections did not relieve the school district of responsibility, since the election itself was created by the school, using the student body as the electorate. Religious matters should not be allowed to depend on majoritarian rule.

Writing in dissent, Chief Justice William H. Rehnquist criticized the holding and the tone of the Court’s decision as “bristl[ing] with hostility to all things religious in public life.” Despite strong words, the dissenters’ legal argument covered the much narrower ground that the Court should wait until Santa Fe’s new policy had been implemented for a period of time before deciding on its constitutionality. The students might not vote to have a student-led prayer, in which case there would be no chance of a constitutional violation. Additionally, Rehnquist argued, the Court gave no deference to Santa Fe’s insistence that the pregame invocation had a secular purpose of solemnizing the football game. For the dissenters, the student-led prayer was protected private speech, not impermissible governmental action.