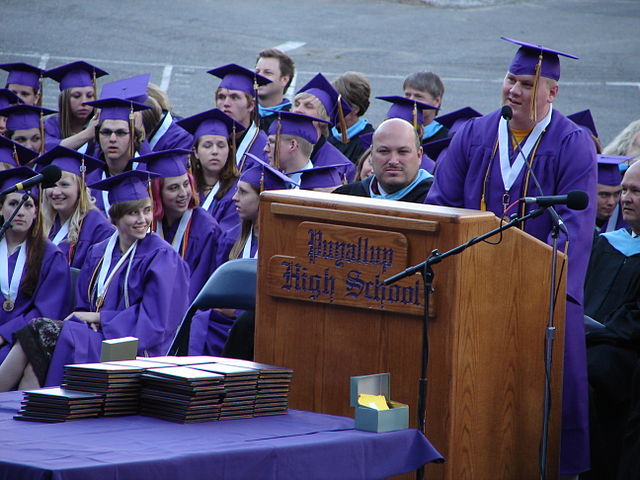 Bethel School District No. 403 v. Fraser, 478 U.S. 675 (1986), in which the Court decided that public school officials can prohibit student speech that is vulgar, lewd, or plainly offensive, remains one of most important First Amendment precedents in the public school context. The case arose after school officials at Bethel High School in Pierce County, Washington, disciplined junior Matthew N. Fraser for delivering a speech laced with sexual references before a student assembly. The Supreme Court upheld his suspension. In this photo, the valedictorian gives a speech at Puyallup High School's graduation in 2005. (Image via Wikimedia Commons, CC BY 2.0)

The case arose after school officials at Bethel High School in Pierce County, Washington, disciplined junior Matthew N. Fraser for delivering a speech laced with sexual references before a student assembly. Fraser’s speech, nominating a classmate to a student elective office, referred to the student as “firm in his pants,” who would take it to “the climax.”

After school officials suspended Fraser, he sued in federal court. A federal district court and federal appeals court ruled in Fraser’s favor, finding that school officials violated his First Amendment rights. In an ironic twist of fate, the lower court’s actions enabled Fraser to deliver the commencement address at his high school graduation.

The school appealed to the U.S. Supreme Court and prevailed by a 7-2 vote. The majority opinion was authored by Chief Justice Warren E. Burger. Fraser contended that he had a First Amendment right to political speech under the principles of Tinker, which protects the vast majority of student speech that does not create a substantial disruption. However, school officials argued that they had a duty to protect younger students from inappropriate and sexual speech.

The Court sided with school officials. Burger noted a “marked distinction” between the political speech in Tinker and Fraser’s sexual speech. “The undoubted freedom to advocate unpopular and controversial views in schools and classrooms must be balanced against the society’s countervailing interest in teaching students the boundaries of socially appropriate behavior,” Burger wrote. “Surely it is a highly appropriate function of public school education to prohibit the use of vulgar and offensive terms in public discourse.” Justice William J. Brennan Jr. concurred, writing that school officials could discipline Fraser because they could reasonably forecast that his speech would be disruptive.

Dissenters thought the speech was not disruptive

Justices Thurgood Marshall and John Paul Stevens authored dissenting opinions. Marshall wrote that school officials failed to present evidence that Fraser’s speech was disruptive. Stevens began his dissent by quoting the famous line from Gone With the Wind, “Frankly, my dear, I don’t give a damn.” Stevens wrote that “if a student is to be punished for using offensive speech, he is entitled to fair notice of the scope of the prohibition and the consequences of its violation. The interest in free speech protected by the First Amendment and ... the Due Process Clause ... combine to require this conclusion.”

The decision remains vitally important in the public school context, because it enables school officials to punish students for profane and lewd expression. Some lower courts have read the Fraser case quite broadly and have determined, for example, that they can prohibit the display of any Confederate flag clothing because it is plainly offensive.