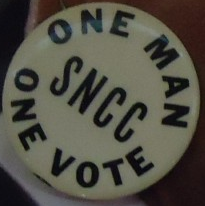 Many of the buttons proclaimed “One Man One Vote” and protested racial discrimination in voting and other aspects of public life. The high school principal banned the buttons, saying they had no relevance to the students’ education and “would cause commotion.”

A federal district court entered an order preventing the principal from punishing the students for wearing the buttons. On appeal, the principal contended that the ban was a reasonable regulation designed to ensure order in the school.

A three-judge panel of the 5th U.S. Circuit Court of Appeals unanimously affirmed the district court’s decision and ruled in favor of the students.

The appeals court declared that school officials “cannot infringe on their students’ right to free and unrestricted expression as guaranteed to them under the First Amendment to the Constitution, where the exercise of such rights in the school buildings and schoolrooms do not materially and substantially interfere with the requirements of appropriate discipline in the operation of the school.”

A few years later, the U.S. Supreme Court cited Burnside three times in its 1969 Tinker decision. The Court used Burnside as its key precedent in establishing the “substantial disruption” test for student expression: school officials may not censor student expression unless they can reasonably forecast that the expression would cause a substantial disruption or material interference with school activities or invade the rights of others.