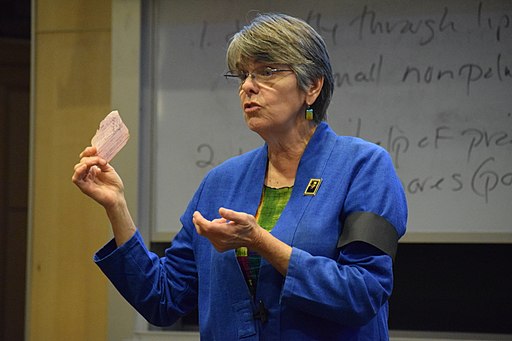 The Ninth Circuit Court of Appeals ruled in Chandler v. McMinnville School District (1992) said the case that should control whether Oregon students in 1990 could wear buttons supporting a teacher strike is Tinker v. Des Moines Independent Community School District (1969). Here, Mary Beth Tinker holds her original detention slip after she wore a black armband to school to protest the Vietnam War (with a replica on her left arm) during a speech at Ithaca College in September 2017. Her case widened protections for student speech. (Photo by Amalex5 via Wikimedia Commons, CC BY-SA 4.0)

The case began in February 1990, when public school teachers in McMinnville, Oregon, began a lawful strike.

McMinnville High School students David Chandler and Ethan Depweg, whose fathers were striking teachers, wore various “scab” buttons, criticizing the use of replacement teachers and expressing support for the strikers. For example, some of the buttons read “I’m not listening scab.”

When school officials prevented the two students from wearing the buttons, the students filed a federal lawsuit, claiming a violation of their First Amendment rights.

School officials asserted a legal right to force the students to remove the buttons because they were offensive and disruptive within the meaning of the Supreme Court’s decision in Fraser establishing the principle that public school officials can punish students for vulgar and lewd speech (in the case of Fraser, at a school assembly). A federal district court agreed with the school officials and dismissed the lawsuit.

On appeal, the Ninth Circuit Court of Appeals reversed and reinstated the students’ lawsuit.

The Ninth Circuit divided student expression cases into three categories based on the trilogy of Supreme Court decisions: “(1) vulgar, lewd, obscene, and plainly offensive speech, (2) school-sponsored speech, and (3) speech that falls into neither of these categories. We conclude ... that the standard for reviewing the suppression of vulgar, lewd, obscene, and plainly offensive speech is governed by Fraser, school-sponsored speech by Hazelwood, and all other speech by Tinker.”

The Ninth Circuit then concluded that the district court should have evaluated the students’ case under Tinker — which involved the political expression of anti-war black armbands — and determined whether the buttons were substantially disruptive of school activities.

Many other lower courts have cited Chandler for its explanation of Supreme Court student speech jurisprudence.

The Ninth Circuit relied on its Chandler precedent to rule in Frederick v. Morse (2006) that the Tinker standard controlled the analysis in whether a student could be punished for displaying a “Bong Hits 4 Jesus” banner across from his school. Although the Supreme Court overruled that decision in Morse v. Frederick (2007), Chandler remains an important lower court, student speech precedent.