By Sekou Franklin
Related cases in Rights of Association, Civil Rights Movement and the First Amendment 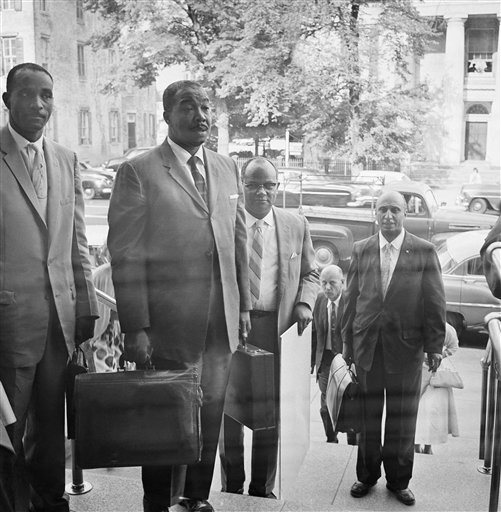 In NAACP v. Button, 371 U.S. 415 (1963), the Supreme Court protected the First Amendment rights of a civil rights group to engage in public interest litigation. The Virginia state chapter of the National Association for the Advancement of Colored People (NAACP) sued Button, the attorney general of Virginia, to enjoin enforcement of a 1956 state statute that prevented groups or third-party entities from litigating on behalf of potential clients. In this photo, lawyers and witnesses participating in the Arlington county school integration hearing arrive at the Federal Courthouse in Alexandria, Va., September 3, 1950. In foreground left to right: Frank D. Reeves, NAACP attorney, Thomas H. Henderson, Dean of Virginia University. (AP Photo, used with permission from the Associated Press)

Virginia law prevented NAACP from litigating in the public interest

The Virginia state chapter of the National Association for the Advancement of Colored People (NAACP) sued Button, the attorney general of Virginia, to enjoin enforcement of a 1956 state statute that prevented groups or third-party entities from litigating on behalf of potential clients.

The law was passed after the desegregation decision in Brown v. Board of Education (1954) and shortly after the Virginia state chapter of the NAACP initiated a campaign to desegregate the state’s public school system. Thus, although the law did not specifically state that civil rights litigants were its intended targets, legal and political observers believed it was designed to undermine the NAACP’s influence.

The law was particularly controversial because it established new regulatory standards for punishing barratry and champerty. (Barratry is the deliberate incitement of lawsuits by attorneys, and champerty occurs when attorneys solicit or offer assistance to potential plaintiffs, even if they have no real interest in the cases.) Virginia began regulating these activities as early as 1849. Proponents of such regulatory measures believed they were necessary to prevent frivolous lawsuits.

The NAACP was less concerned about the barratry provision because it had been ruled unconstitutional by a lower court. The most intense debate focused on the ban on champerty and how Virginia defined the activity. The law interpreted champerty to include attorneys or groups that solicited prospective plaintiffs in addition to those outside the legal profession who may have encouraged the plaintiffs to seek legal assistance. Civil rights activists also claimed that the law was broad enough to include and punish the plaintiffs.

Court made a preliminary decision to uphold the law

Notwithstanding these concerns, several lower courts upheld the law. In November 1961, the Supreme Court also made a preliminary decision by a 5-4 margin to uphold the law. The Court did not deliver this decision, however, because of the departures of Justices Charles E. Whittaker and Felix Frankfurter, both of whom had voted to uphold the law.

Court later struck down the law

The case was reargued the next year; this time Byron R. White and Arthur J. Goldberg, the Court’s new justices, voted with the majority, effectively striking down the law.

The Court found that the law prevented the NAACP and its Legal Defense Fund (LDF) from assisting prospective plaintiffs and using litigation as a form of political expression. The LDF argued that litigation was one of the few political strategies available to civil rights activists because most African Americans in the South during this period were disenfranchised and because civil rights protests were usually met with severe repression.

Court said law was too broad

Writing for the majority, Justice William J. Brennan Jr. said that the law was too broad because it penalized third-party attorneys and organizations, clients, and individuals who may have referred clients to the attorneys. He reasoned that previous measures banning champerty in Virginia targeted groups that used litigation to resolve private disputes or groups that attempted to prosecute all types of criminal actions for the purposes of financial gain. The NAACP, however, was only involved in cases pertaining to racial discrimination. It did not use litigation for financial gain but as a form of expression to “vigorous[ly] advocate” for equal rights and constitutional protections.

In his concurring opinion, Justice William O. Douglas said the Court majority did not go far enough in exposing the real intentions of the Virginia law, which was to thwart the NAACP’s school desegregation campaign.

Justice White concurred in part and dissented in part. He said the Virginia law would have been constitutional had it only punished the conduct of third-party organizations involved in the recruitment of clients. However, as it was, the law was too expansive and allowed for penalties to be levied against clients and other individuals remotely associated with a case.

The dissenting opinion was written by Justice John Marshall Harlan II, who had issued the opinion for a unanimous Court in NAACP v. Alabama (1958), which provided First Amendment protections for civil rights groups. In this case, Harlan said litigation fell outside of the scope of the First Amendment’s protections of political expression and association and that Virginia’s champerty ban was consistent with conduct that the American Bar Association’s Canons of Professional Ethics prohibited. Evidence of the NAACP’s involvement in champerty, Harlan insisted, could be found in the organization’s compensation and hiring practices of attorneys, its selective recruitment of prospective litigants, and its legal and philosophical approach to challenging school desegregation.

Although Brennan insisted that the majority decision applied to all groups that wanted to use litigation as a vehicle of expression and association, including white supremacy organizations, Harlan was not convinced. He believed the majority wrote its decision to immunize the NAACP from legitimate regulations of unethical legal conduct, especially when these regulations were developed by individual states.

The decision was important not only to First Amendment jurisprudence but also to the vitality of public interest law firm litigation in general.