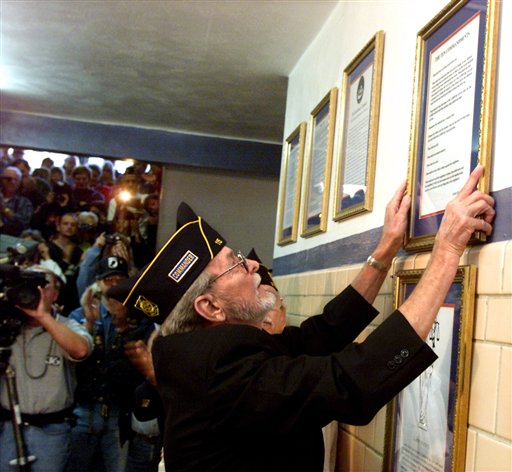 Veterans and supporters watch as Paul Worthington, commander of the local American Legion post, hangs a copy of the Ten Commandments the McCreary County courthouse in Whitley City, Ky., in a Tuesday, Oct. 10, 2000 file photo. the Supreme Court struck down Ten Commandments displays in courthouses Monday, June 27, 2005, holding that two exhibits in Kentucky crossed the line between separation of church and state because they promoted a religious message. (AP Photo/Wade Payne. Reprinted with permission from The Associated Press.)

In McCreary County v. American Civil Liberties Union, 545 U.S. 844 (2005), the Supreme Court, relying heavily on the history behind the exhibited images in question, held 5-4 that Ten Commandment displays in two Kentucky county courthouses violated the establishment clause of the First Amendment. The Court decided this case the same day as another Ten Commandment case in Texas, Van Orden v. Perry (2005), in which the Court ruled 5-4 that a monument of the Ten Commandments in a Texas public park did not violate the establishment clause.

The American Civil Liberties Union of Kentucky sued two Kentucky counties for displaying framed copies of the Ten Commandments taken from the King James version of the Bible. The courthouse displays were readily visible to those using the courthouse. After the district court ruled the displays were in violation of the establishment clause, the counties modified the displays to include a variety of other documents. Each of the new documents mentioned God, and some documents were edited to include only religious references.

The Sixth Circuit Court of Appeals affirmed the ruling, so the counties posted a third version of the displays, which included fuller versions of some of the documents contained in the second display and some additional documents that did not reference God. The new displays also included a “prefatory document” that claimed the displays contained “documents that played a significant role in the foundation of our system of law and government."

The case moved to the Supreme Court, which affirmed that the purpose of the displays was to advance religion — a violation of the First Amendment. The Supreme Court litigation focused only upon the displays in two counties — McCreary County and Pulaski County.

Writing for the majority, Justice David Souter focused on the history of the display and the lack of a secular purpose evinced by that history. The Court’s secular purpose analysis invoked the Lemon test from Lemon v. Kurtzman (1971), explaining that the purpose analysis in that test is meant to ensure government neutrality regarding religion. The Court also applied endorsement analysis, explaining that when government favors religion, it sends a message to “nonadherent that they are outsiders, not full members of the political community, and an accompanying message to adherents that they are insiders, favored members” of the political community.

The Court further clarified the secular purpose test by holding that “[t]he eyes that look to purpose belong to an ‘objective observer’ . . . who takes account of the traditional external signs that show up in the ‘text, legislative history, and implementation of the . . . official act.” According to the Court, if an objective observer would perceive the predominant purpose behind a government action as religious, the government is “taking religious sides. “In this regard the history and context of the display — of which the observer is presumed to be aware — are important.

Court said no per se rule against displaying the Ten Commandments, needs context

The Court held that there is no per se rule against displaying the Ten Commandments. Yet when the text of the commandments is present, the religious message is “hard to avoid “absent a context that suggests the display is not meant to promote religion. Additionally, surrounding the text with other historical documents, whose main connection is that they contain religious references, would only make a reasonable observer more likely to perceive a religious purpose.

The counties’ third display ostensibly was intended to represent the foundations of American law, but in light of the history of the displays and the odd choices of the historical documents included in them, the display did not have a secular purpose. The Court found attempts to link the Ten Commandments, with their divine origin, and the Declaration of Independence, which derives governmental power from the people, especially strange.

This article was originally published in 2009. Frank S. Ravitch is Professor of Law and Walter H. Stowers Chair in Law in Religion at the Michigan State University College of Law. He is the author of several books, including Freedom’s Edge: Religious Freedom, Sexual Freedom, and the Future of America (Cambridge University Press, 2016), Masters of Illusion: The Supreme Court and the Religion Clauses (NYU Press 2007), and School Prayer and Discrimination: The Civil Rights of Religious Minorities and Dissenters (Northeastern University Press, 1999). He is co-author of the first comprehensive treatise on Law and Religion in more than one hundred years, Religion and the State in American Law (Cambridge University Press 2015). His articles have primarily focused on law and religion in the U.S. and Japan, but he has also written about civil rights law and disability discrimination. He has also authored a number of amicus briefs to the U.S. Supreme Court.