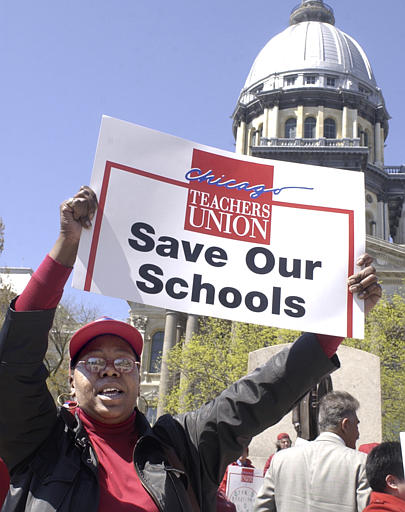 Chicago Teachers Union v. Hudson (1986) ruled a union's dues collection procedures were insufficient to protect First Amendment free association rights. In this photo, Delphine Hill, a teacher's assistant for Chicago Public Schools for 14 years and a member of the Chicago Teachers Union, holds a sign outside the Capitol building in Springfield, Ill., Wednesday, April 13, 2005, during a rally in support of legislation to provide more money for education. (AP photo/Randy Squires, used with permission from the Associated Press)

In Chicago Teachers Union v. Hudson, 475 U.S. 292 (1986), a unanimous Supreme Court ruled as insufficient a set of union procedures created for nonmembers to object to due collection.

Chicago Teachers Union had procedure for objection to due collection

The Chicago Teachers Union had established a three-pronged procedure for objecting to the collection of dues:

First Amendment rights must be protected through procedural safeguard

The Court, relying on its earlier decision in Abood v. Detroit Board of Education (1977), held that the procedural safeguards were necessary for two reasons.

The Court held that the original union procedure was inadequate because it failed to minimize the risk that nonunion employees’ contributions might be used for impermissible purposes, failed to provide adequate justification for the advance reduction of dues, and failed to offer a prompt decision by an impartial decision maker.

In order to meet the requirements of the First Amendment, the union’s collection of fees had to include an adequate explanation of the basis for the fee charged, a reasonably prompt opportunity to challenge the amount of the fee before an impartial decision maker, and an escrow account for the amounts reasonably in dispute while such challenges are pending.

Justice Byron White filed a concurring opinion, which Chief Justice Warren E. Burger joined, reasoning that if the union provides for arbitration and complies with the requirements of the First Amendment, it should be allowed to insist that the dissenter exhaust the arbitration procedure before going to court.