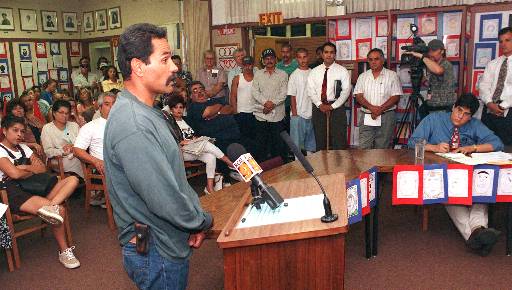 In City of Madison v. Wisconsin Employment Relations Commission, 429 U.S.167 (1976), the Supreme Court invalidated an order forbidding nonunion teachers from speaking at a school board meeting. The order had been upheld by the Wisconsin Supreme Court. In this photo at an unrelated meeting, Joe Salazar speaks to the Alvord Unified School Board meeting in Riverside, Calif., Thursday, July 10, 1997.  (AP Photo/William Wilson Lewis III, used with permission from the Associated Press)

In City of Madison v. Wisconsin Employment Relations Commission, 429 U.S.167 (1976), the Supreme Court invalidated an order forbidding nonunion teachers from speaking at a school board meeting. The order had been upheld by the Wisconsin Supreme Court.

WERC tried to stop nonunion members from speaking at board meetings

The Wisconsin Employment Relations Commission had issued the order after the union alleged that a teacher’s short presentation to the board — concerning a clause in a proposed labor agreement providing that nonunion members pay dues to defray the costs of bargaining — had violated a provision in a collective-bargaining agreement restricting negotiations to authorized union representatives.

Wisconsin had argued that permitting such a presentation by a nonunion member presented a clear and present danger to labor-management relations.

In the opinion for the Court, Chief Justice Warren E. Burger asserted that the presentation at a public meeting was not part of the formal labor negotiation and that considering it to be such would unduly burden the rights of freedom of speech and petition.

Moreover, likening board meetings to a public forum, Burger observed, “Where the State has opened a forum for direct citizen involvement, it is difficult to find justification for excluding teachers who make up the overwhelming proportion of school employees and who are most vitally concerned with the proceedings.”

He argued that “when the board sits in public meetings to conduct public business and hear the views of citizens, it may not be required to discriminate between speakers on the basis of their employment, or the content of their speech.”

He further noted, “Teachers not only constitute the overwhelming bulk of employees of the school system, but they are the very core of that system; restraining teachers’ expressions to the board on matters involving the operation of the schools would seriously impair the board’s ability to govern the district.”

When government creates public forum, it cannot exclude some individuals

In a concurring opinion, Justice William J. Brennan Jr., joined by Thurgood Marshall, cited the opinion of Justice Oliver Wendell Holmes Jr. in Bi-Metallic Investment Co. v. State Board of Equalization (1915) to emphasize that the Constitution does not require the government to do all business in public, but that when it creates such a public forum, it may not selectively exclude individuals.

The state could no more prevent a speaker at such a forum “than it could prevent him from publishing the same views in a newspaper or proclaiming them from a soapbox.”

In a separate concurring opinion, Justice Potter Stewart agreed that the teacher’s speech had not posed any threat to the union’s exclusive representation of other teachers while also affirming Brennan’s argument that the board had not been required to open its meetings to the public.

In Minnesota Board for Community Colleges v. Knight (1984), the Supreme Court distinguished this case by limiting it to occasions in which the state had created a public forum.