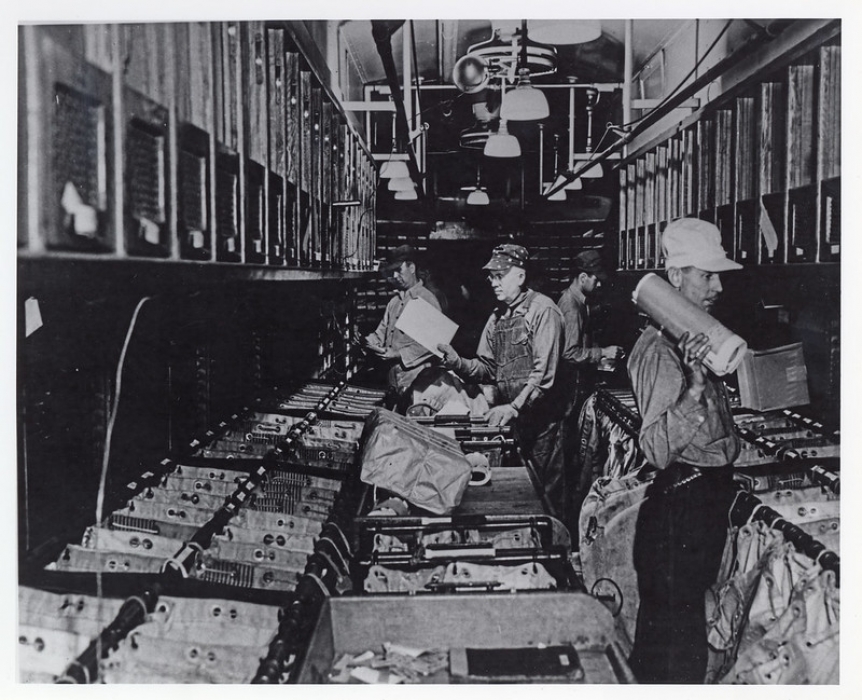 In Ellis v. Brotherhood of Railway, Airline and Steamship Clerks 466 U.S. 435 (1984), the Supreme Court held unanimously that a rebate scheme for nonunion members who objected to a union’s collection of dues was constitutionally inadequate in protecting the First Amendment rights of those nonunion members to refrain from supporting views and activities with which they disagreed. (Image of Railway Post Office clerks at work sorting mail inside the tight quarters of an RPO car via Smithsonian Institution on Flickr, 1920, public domain

In Ellis v. Brotherhood of Railway, Airline and Steamship Clerks 466 U.S. 435 (1984), the Supreme Court held unanimously that a rebate scheme for nonunion members who objected to a union’s collection of dues was constitutionally inadequate in protecting the First Amendment rights of those nonunion members to refrain from supporting views and activities with which they disagreed.

The Court went on to address six specific activities to see if they were impermissible expenditures of union dues: the Grand Lodge Convention, litigation not involving the negotiation of agreements or settlement of grievances, union publications, social activities, death benefits for employees, and general organizing efforts.

Howard Ellis was one of the nonunion members who objected to paying for union expenditures that were not directly related to work that the union was conducting on his behalf. Ellis and his colleagues tried to distinguish what they owed for collective bargaining services from other union interests.

In a decision written by Justice Byron R. White, the Court held that the collection of dissenting members’ dues, even temporarily, constituted an impermissible loan. Because alternatives were readily available to charging and then rebating the dues, such as advance reduction of dues or the use of escrow accounts, White wrote, the union could not be allowed to use dissenters’ dues for improper purposes, even temporarily.

The union, he continued, could charge its expenditures to all employees only if they were germane to collective bargaining. When an objection to certain fees is raised, White wrote, the proper test must be “whether the challenged expenditures are necessarily or reasonably incurred for the purpose of performing the duties of an exclusive representative of the employees in dealing with the employer on labor-management issues.”

He went on to say that under this test, employees could reasonably be compelled to pay not just the direct costs of negotiating and administering a collective-bargaining agreement, but also the expenses of activities or undertakings normally employed to implement the duties of the union as the exclusive representative of the employees.

In addressing the six activities, White stated that social activities and publications were appropriate uses of union fees, but general organizing efforts and litigation of non-negotiation matters were outside the scope of permissible activities.

The Court failed to rule on the question of death benefits, since the union was no longer the exclusive representative of the employees. But it did hold that the employees were not entitled to a refund of previous dues paid for the death benefit.

Justice Lewis F. Powell Jr. concurred in most of the Court’s opinion. He disagreed with the treatment of the Grand Lodge Convention, finding that the convention could be, and in fact was, used for political objectives.