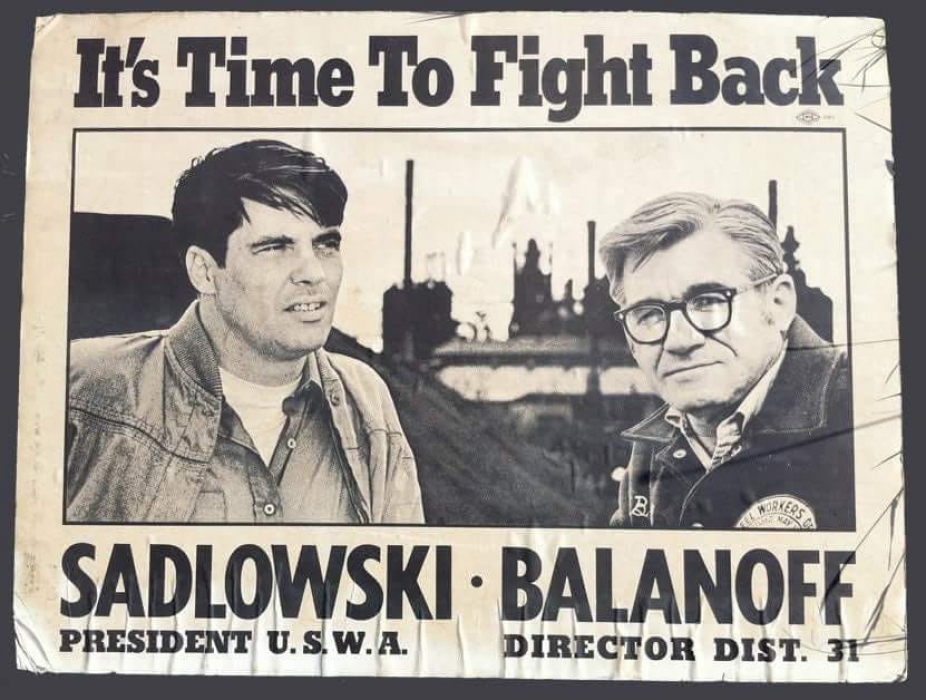 Ed Sadlowski challenged a law that prohibited candidates for union leadership offices from accepting contributions from non-union members. The Supreme Court upheld the law as reasonable, although noting that it could interfere with some First Amendment values. Shown here is a campaign poster from Ed Sadlowski's (left) famous electoral bid for the United Steelworkers presidency, along with Jim Balanoff (right), candidate for director of District 31.

The Supreme Court decision in United Steelworkers of America v. Sadlowski, 457 U.S. 102 (1982), found that a rule that precluded candidates for a union office from accepting outside contributions imposed “reasonable” restrictions, although acknowledging that it interfered with some First Amendment rights.

The Labor-Management Reporting and Disclosure Act of 1959 contained what was known as a “Bill of Rights of Members of Labor Organizations,” which included a provision guaranteeing freedom of speech and assembly. It also sought to amend its constitution to add an “outsider rule” prohibiting candidates for its offices from accepting campaign contributions from nonmembers.

Edward Sadlowski Jr., who had vied unsuccessfully for leadership of the union, challenged this rule and was favored in both the U.S. district court and the U.S. Court of Appeals for the District of Columbia, the latter of which viewed the outsider rule as one that would reduce the ability of insurgents to challenge existing union leaders and thus as an interference with First Amendment freedoms of speech and assembly.

The Supreme Court overturned the decisions of the lower federal courts.

In examining the remarks of Senator John L. McClellan and others who had supported the law, Justice Thurgood Marshall argued that the law was designed to protect First Amendment values but denied that its scope was “identical to the scope of the First Amendment.”

In a dissent joined by three justices, Justice Byron R. White, in his examination of congressional debates on the bill, pointed out that it was specifically designed to allow union members to seek higher offices, and he thought that banning contributions by outsiders was a “Draconian” response.