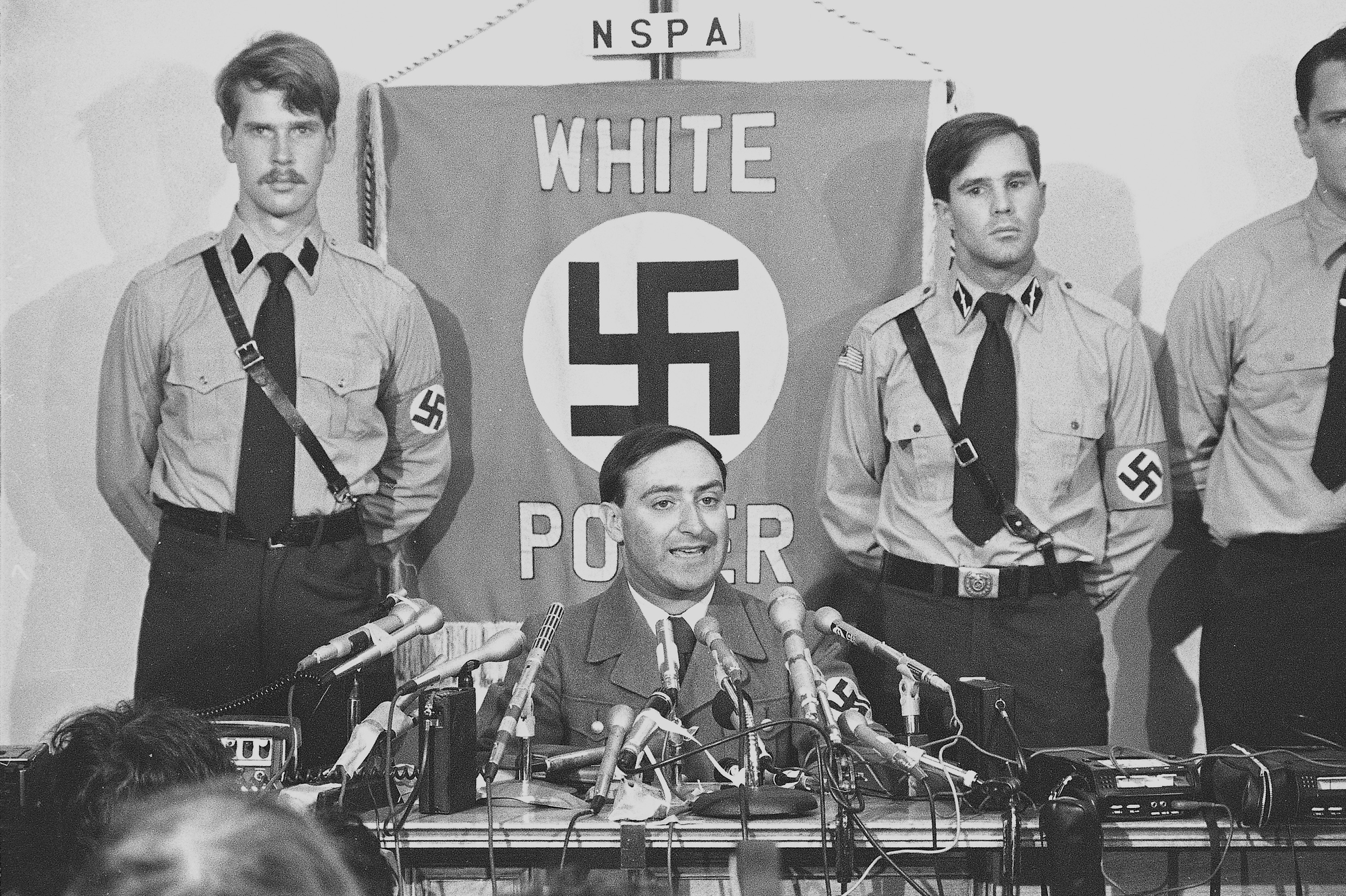 Frank Collin, pictured above, was the leader of the National Socialist Party of America when it became the center of one of the first Supreme Court decisions about the constitutionality of hate speech, Village of Skokie v. Nationalist Socialist Party of America. The National Socialist Party, which wore swastika armbands and advocated white power, had wanted to conduct a demonstration in Marquette Park in Chicago, but were blocked by Chicago authorities. They then announced they would march in Skokie, a predominantly Jewish suburb in Chicago that was home to many Holocaust survivors. A Cook County court issued an injunction that was challenged and eventually overturned on First Amendment grounds. Here, Collin announces plans to call off its planned march in Skokie, winning permission to march in Chicago instead. (AP Photo/Fred Jewell, used with permission from The Associated Press)

In Village of Skokie v. National Socialist Party of America, 373 N. E. 2d 21 (Ill. 1978), the Illinois Supreme Court held that the display of swastikas did not constitute fighting words and thus the enjoining of that speech was an unconstitutional prior restraint. The Illinois decision would set the foundation for later hate speech cases.

Case had complicated path before coming back to the state court

The case had a complicated journey: from the Cook County Circuit Court, which enjoined members of the National Socialist Party of America from conducting demonstrations in the village of Skokie, Illinois; to the Illinois Appellate Court, which denied the application for stay pending appeal; and then to the Illinois Supreme Court, which denied the petition for stay. The application for stay was treated as a petition for certiorari and the U.S. Supreme Court, in Nationalist Socialist Party of America v. Village of Skokie (1977) reversed and remanded. On remand, the case wound itself back to the Appellate Court, First District, and then back to the Illinois Supreme Court in the case described here.

Skokie was one of the first hate speech decisions

Skokie was one of the first decisions in what would become an ongoing debate over the constitutionality of limiting hate speech. The issue arose when the National Socialist Party of America (NSPA) requested permission to hold a demonstration in the community of Skokie. The NSPA was a group devoted to inciting racial and religious hatred, primarily against people of the Jewish faith and non-Caucasians. Skokie was home to some 70,000 people, of whom 40,500 were Jews, and of those 5,000–7,000 were survivors of Nazi concentration camps. Because of the high population of Jews, village leaders sought to enjoin the demonstration, but the Illinois Supreme Court ruled that the NSPA had a First Amendment right to demonstrate in Skokie.

The court first established that “public expression of ideas may not be prohibited merely because the ideas are themselves offensive to some of their hearers.” In other words, the listener’s feelings could not be considered valid reasons for prohibiting speech. However, the court also noted that governments can restrict certain categories of speech — obscenity, defamation, fighting words — because of their content. In these cases, the government still maintained “the heavy burden of justifying the imposition of a prior restraint upon the defendants’ right of freedom of speech.” To decide this particular case, the court looked at the category of fighting words to see if the restraint on speech could be considered constitutional.

Court found that the swastika did not constitute fighting words

The fighting words category, which originated in Chaplinsky v. New Hampshire (1942), is defined as those words that do nothing more than inflict injury or incite immediate violence. In Skokie, however, the court decided not to use the definition from Chaplinsky; rather, it used the modified version from Cohen v. California (1971), which had involved the display of a vulgar word on a jacket. In Cohen, the majority explained that under the “premise of individual dignity and choice upon which our political system rests” government restriction should be avoided except in the most severe circumstances. “[V]erbal tumult, discord, and even offensive utterances” do not rise to that level of severity.

Relying on this reasoning from Cohen, the state supreme court in Skokie found that it would be impossible for governmental entities to determine which offensive words and symbols did not merit First Amendment protection and which invectives were worthy of it. Governments could not choose what was acceptable public discourse based merely on the fact that certain symbols roused anger or resentment in the listener. The swastika could not be considered fighting words, nor could the audience’s reaction be a justifiable reason for restricting speech. The U.S. Supreme Court applied this same reasoning in R.A.V. v. St. Paul (1992) to find a bias-motivated crime ordinance unconstitutional.