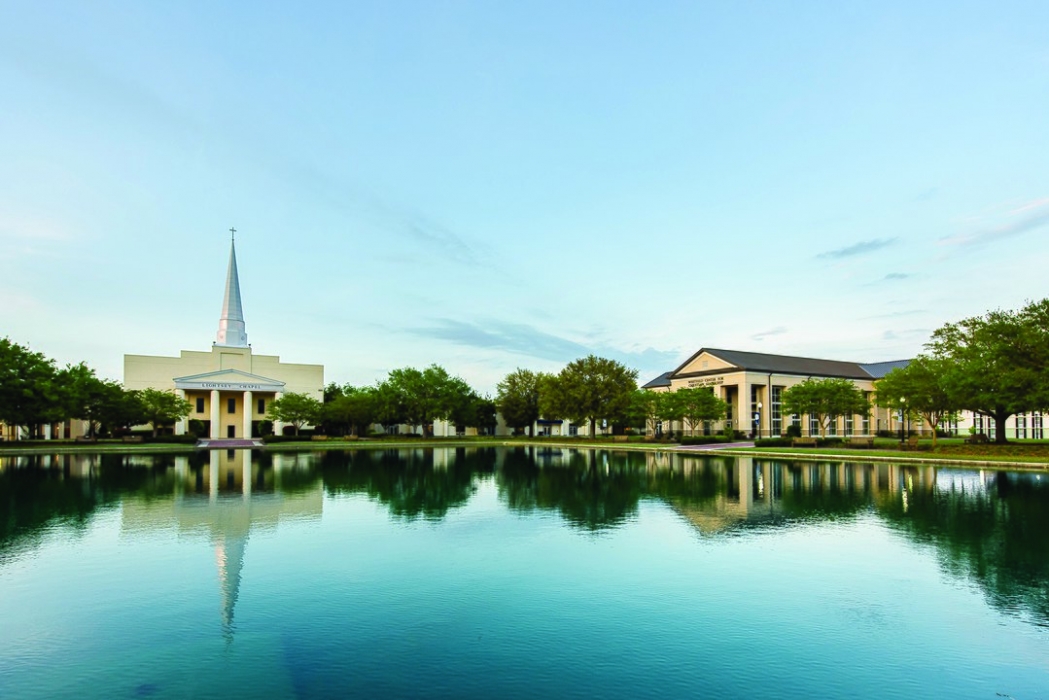 In 1973, the Supreme Court upheld a South Carolina law that allowed the use of state tax-free bond authority to finance non-religious college facilities, including at the religious college Baptist College of Charleston, pictured here. At issue in the case was whether the establishment clause prohibited such state financial aid. (Photo of Baptist College, which has since changed its name to Charleston Southern University. This photo is of Lightsey Chapel Auditorium on the campus, by Charleston Southern via Wikimedia Commons, CC BY-SA 4.0)

In Hunt v. McNair, 413 U.S. 734 (1973), the Supreme Court affirmed a lower court decision interpreting the establishment clause of the First Amendment to allow for greater state financial interaction with religious colleges than with elementary or secondary schools.

The case, brought by a South Carolina taxpayer, Richard W. Hunt, against the state governor, Robert E. McNair, involved the constitutionality of the South Carolina Educational Facilities Authority Act, which authorized the use of state tax-free bond authority to finance facilities at colleges, including the Baptist College at Charleston. As a condition of such bond use, the law prohibited the colleges from using the buildings for worship or sectarian instruction. The Supreme Court decided the case on the same day that it decided Committee for Public Education and Religious Liberty v. Nyquist.

The Court majority, led by Justice Lewis F. Powell Jr., upheld lower court decisions affirming the law. Powell thought the law was justified under the decisions in Lemon v. Kurtzman (1971) and Tilton v. Richardson (1971). Applying the three-part Lemon test, Powell found that the law had the secular purpose of educating South Carolina students, had neither the primary effect of advancing nor inhibiting religion, and avoided excessive entanglement because the college was not pervasively religious.

In a dissenting opinion, Justice William J. Brennan Jr., joined by Justices William O. Douglas and Thurgood Marshall, argued that the law gave the bond-issuing authority too much control over buildings on the campus of a religious college. Brennan argued that the establishment clause did not simply forbid “payment of public funds directly to support sectarian institutions.” Instead, he argued that it prohibited “any official involvement with religion . . . which tends to foster or discourage religious worship or belief.” He observed that South Carolina aided the college by permitting it “to avail itself of the State’s unique ability to borrow money at low interest rates” and that the college, in turn, “surrenders to the State a comprehensive and continuing surveillance of the educational, religious, and fiscal affairs” of the college.