Roemer v. Board of Public Works of Maryland (1976) 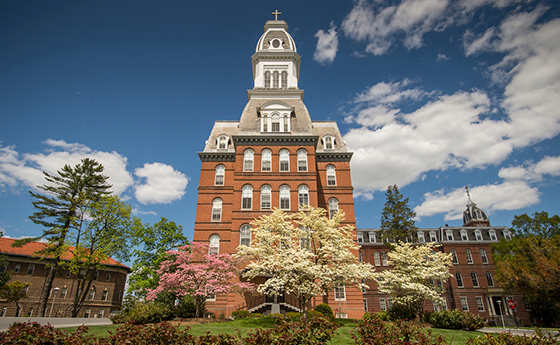 In Roemer v. Bd. of Public Works of Maryland, 426 U.S. 736 (1976), the Supreme Court continued its tradition of upholding public aid to sectarian institutions of higher education.

In doing so, the Court took the approach that, by and large, educational institutions operated by religious groups can be trusted not to use public funding to propagate their religious ideologies.

Roemer involved a grant by Maryland to most private colleges within the state. As five of the 17 benefited colleges were operated by religious denominations, including four by the Catholic Church, several Maryland taxpayers brought suit in a federal district court to invalidate the grant statute as a violation of the establishment clause of the First Amendment.

The district court upheld the statute and the Supreme Court affirmed.

There was no majority opinion in the 5-4 Roemer decision.

Justice Harry A. Blackmun wrote for the plurality and used the three-pronged test of Lemon v. Kurtzman (1971) as the basis for his analysis. The first part of the Lemon test — whether the main purpose of the law was religious rather than secular — was irrelevant here, as no contention was made that this was its main goal.

On the second Lemon question of whether the primary effect of the statute was to advance religion, he concluded that this was not its primary effect. He noted that it explicitly banned use of the state aid for sectarian purposes. Also, articulating a theme that was to recur in later cases such as Agostini v. Felton (1997), Blackmun noted that it could not be assumed that these institutions would clandestinely employ their state aid to further the teaching of religious dogma.

Blackmun relied heavily on Tilton v. Richardson (1971), which upheld a federal grant to private colleges, including church-related ones, to construct academic facilities that could not be used for sectarian purposes, and which emphasized that academic freedom did exist at the denominationally operated colleges receiving the construction grants and that college students were less susceptible to religious indoctrination than were younger pupils.

Though the state audited the colleges, Court found no excessive entanglement

He then asked whether the Maryland statute created “excessive entanglement” between church and state, thus failing the third prong of Lemon.

One problem here was that the Maryland subsidy was an annual one, unlike the “one-time-only” federal assistance involved in Tilton. Moreover, a Maryland state agency was to supervise the administration of the state aid to ensure that none of it was used for sectarian purposes.

Nonetheless, Blackmun adopted the district court’s thesis that there was no excessive entanglement. For example, the agency’s audits of the colleges’ expenditures would be swift and relatively rare given the essentially secular nature of the four Catholic colleges.

Justice Byron R. White’s opinion concurring in the judgment declared that the excessive entanglement test had no place in establishment clause analysis.

Justice William J. Brennan Jr.’s short dissent warned that the state dollars flowing to the four colleges would further their attempts at religious as well as secular instruction. And Justices Potter Stewart and John Paul Stevens wrote separate dissents, the former expressing unease about the fact that these colleges featured mandatory and possibly nonobjective theology courses.

This article was originally published in 2009. Daniel C. Kramer (1934-2010) was the author of six books and numerous articles about public law and American politics. He was a professor at the College of Staten Island for over 30 years before becoming a professor emeritus in political science.